I checked the tide tables last night and I could see that this morning high tide was early, but not as early as I thought! My misreading of the tide tables resulted in me making the decision to go down to the estuary and look for a few waders as the mudflats are better on a falling tide. However, when I got down to the estuary this morning at a leisurely 7:00 am, there was an awful lot of water in the river and it was just on the turn! My mistake was looking at yesterdays times for today and not adding the hour for British summertime! The result was that there was barely any exposed mud for the waders!

Walking down to the estuary a Blackcap and a sub-singing Chiffchaff were the only warbler species that I recorded. Out on the small area of exposed mud I had 250 Lapwings, 120 Redshanks, five Curlews and a single Dunlin!

Two Stock Doves crossed the river and three Little Egrets gave me a buzz, and even though they are relatively common now it still gave the morning a continental feel to me! On the pool were seven Coots, ten Little Grebes, ten Tufted Ducks and a pair of Mute Swans with four cygnets.

A flock of 22 Goldfinches and four Linnets fed along the estuary edge and two Grey Wagtails south was the only 'vis' that I recorded.

I then headed to the farm fields by the school and cut my net rides (see below) in preparation for my first autumn ringing session here. The forecast is borderline for ringing tomorrow, plus I'm in Manchester tonight watching the mighty Roy Harper at one of a handful of 75th birthday gigs, so the ringing will have to wait until the first decent morning after tomorrow. 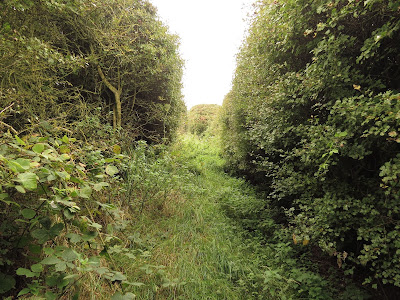 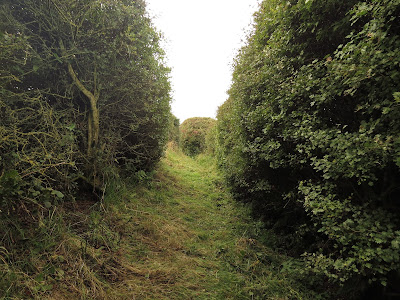 After
Posted by The Hairy Birder at 16:55