More Twite and a Great White

I started off at the cemetery yesterday morning under full cloud cover with a 5 mph ENE wind. I thought that there might be a few grounded migrants this morning but I was greeted with that eerie silence, where your first instincts based on this are usually right, that it is going to be quiet.

A few Meadow Pipits were going over, 77 in total, as well as two Goldfinches and five Woodpigeons heading in the same northerly direction. After a full circuit I didn't have a single grounded migrant.

I headed to the coastal park and again it 'felt' quiet, no singing Willow Warblers etc. After a short while I could hear the familiar fast trills and buzzing sounds that emanate from a flock of excited Twite. There in the top of a Sycamore again were 34 of these delightful birds. 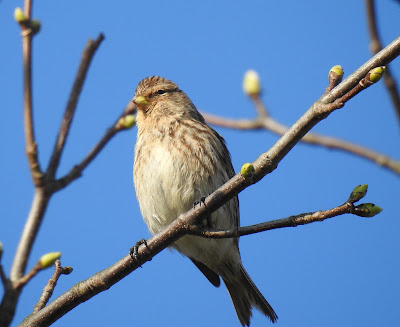 There were a few grounded migrants here in the form of two Chiffchaffs, a male Blackcap and a Goldcrest; all three silent and not calling at all.

There was some vis over the coastal park and I had my first Lesser Redpoll over for the Spring, and a handful of Meadow Pipits headed north. Equally as excitable as Twite are Siskins, and a few headed east. Some were dropping in and feeding on the Sycamore buds before heading off again, and a party of six did just that as they called noisily to each other.

The best bird on vis was a Great White Egret that headed east over me at 0740, and I see it was picked up further east over Preesall at 0754! I tried to get a shot, but the results on the back of my camera were a large white, blurry mess!

A Swallow over ended a couple of hours out in the field. 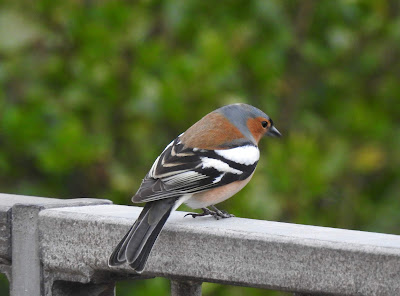 One of the resident male Chaffinches
Posted by The Hairy Birder at 19:42