You can't beat a patch, or several patches as I have. A patch could be as small as your garden, or as large as an estuary. You can record anything from invertebrates, to wildflowers, birds or mammals on it. You can visit a patch once a day, once a week, once a month or even just once a year. The excitement and motivation is getting to know that patch, and when you record something new for your patch, even if it is common, you get a buzz from it. It's also excellent citizen science, and records from your patch can contribute and make a difference to conservation.

Some of the sites that I survey for my job have become patches, like my nine plantation woodland sites in Cumbria. I've got to know them well, even though I only visit them three times per year. And when I record something out of the ordinary for that patch, a little bit of patch magic happens.

I stumbled upon a bit of patch magic yesterday morning at one of my sites near Wigton. I had just started to survey the first woodland compartment and was walking along the edge of the trees adjacent to a field that had been ploughed and tilled ready for re-seeding, when a 'white rump' bounced past me! A 'White Arse' as they used to be known , but Wheatear to you and me! Now, a Wheatear isn't unusual by any means, and if back at the Obs all I had recorded was a single Wheatear on any given day in April, I would be disappointed. But this was a new bird for the 'patch', a bit of that patch magic if you will! 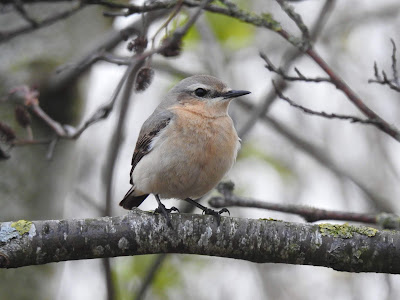 My survey finished, I headed to one of my patches on the Scottish side of the Solway between Gretna and Eastriggs for the second bit of patch magic, although I didn't manage a photograph this time.

As I was scanning a section of rocky shore and counting the Redshanks, I caught a movement in my telescope and there on the water's edge was an Otter! I couldn't believe it and I could hardly contain my excitement. I had cracking views through my telescope, but unfortunately it was just too far away for a photograph. Another bit of patch magic!

It was still quite cold down on the Solway and I had to don woolly hat and gloves! In the scrub along the edge of the estuary and around the gardens of the hamlet, I had 17 Goldfinches and 18 Tree Sparrows. Other passerines along this stretch included six Siskins (5 east), 31 Meadow Pipits (27 grounded), a singing Chiffchaff and two singing Willow Warblers.

Out on the river were 23 Goldeneyes, a pair of Gadwall, a pair of Red-breasted Mergansers, a pair of Goosanders and 20 Shelducks. There wasn't the same number of waders around and all I had were 87 Redshanks, twelve Oystercatchers and four Curlews.

The Easter weekend is looking glorious weather-wise, but I'm out surveying on Good Friday and Easter Monday, but I'm hoping to get some birding and ringing done at the Obs over weekend.
Posted by The Hairy Birder at 10:22