Yesterday I was surveying the wetland complex on one of my client's farms in Bowland, and this farm is probably the only place in Lancashire that I can still guarantee to hear a Cuckoo.

I arrived at the farm to complete my survey under three oktas of hazy cloud, with a light northeasterly wind. It was a tad cool at first, but it soon warmed up. As I got out of my car, a movement caught my eye and a stonking Barn Owl lifted off one of the fence posts of a newly planted hedge. I was to see this Barn Owl several times during the course of the morning, but I was never quick enough, or good enough, to get a picture.

There was a reasonable number of Willow Warblers along the wetland complex that I was surveying and my total of nine, included six singing males. The only other warbler species I had was a singing Blackcap.

Even though I was only walking a small portion of the farm, and not in the best areas for Brown Hares, I still managed to record eighteen of these delightful creatures! 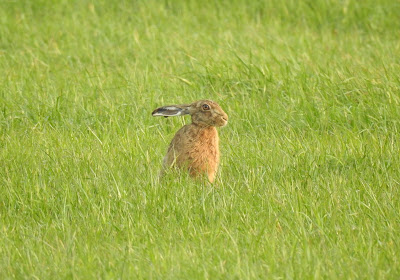 The wetland complex is away from some of the best breeding wader fields, but nevertheless I still had five Curlews, four Common Sandpipers, a Snipe, ten Lapwings and sixteen Oystercatchers. 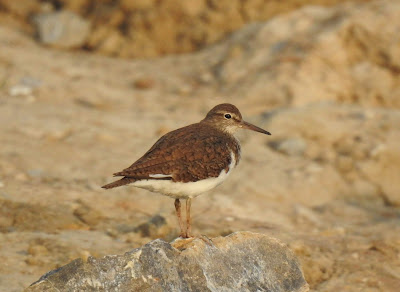 As I stated in my introduction this farm is the only place where in recent years I can guarantee hearing or seeing a Cuckoo. This morning was no exception and I had two calling birds from different parts of the farm. There's nothing like a Cuckoo to reassure you that the world is still turning!

The wetland complex that I was surveying consists of 10-12 interlinked wetlands/ponds and on some of them were breeding Tufted Ducks, totalling about ten pairs.

A Raven, a Buzzard, four Lesser Redpolls, two Siskins and a Mistle Thrush later and I had completed my survey. Of course, the above is only the potted highlights of all the species I recorded and I didn't want to bore you with counts of Mallards, Moorhens, Coots etc.

The forecast is changeable over the next few days, but that can often mean some interesting birds!
Posted by The Hairy Birder at 19:54