Earlier in the week we were in central Scotland carrying out the first of a series of bird surveys. The 2:30 am alarm call to get there for a reasonable time was the tricky bit of the morning, because the site was quite interesting, particularly for breeding warblers.

I have never seen, actually that should have been heard or recorded, as many Grasshopper Warblers at a site before and we had 15 'reeling' birds! Even more prolific was Willow Warbler with 25 singing males! Other warblers included seven singing Whitethroats, three singing Goldcrests, two singing Blackcaps and a singing Garden Warbler.

At the end of the week I was at one of my plantation woodland survey sites in north Cumbria. Again warblers were a feature of the morning with five Willow Warblers and five Blackcaps. I won't trouble you with the rest of what I saw, but instead take you north of the border again to the Solway shore between Gretna and Eastriggs to my 'patch'. I spoke to Gail in the 'sooth' who told me it was raining in Lancs, but on the Solway I was birding under full cloud cover, granted, but at least it was dry!

Just in front of where I park there was five Whimbrels, one of my favourite waders, feeding on the muddy shore. Even though it was cloudy, looking south, any photos I attempted were hideously over-exposed. Joining the Whimbrels was a cracking summer plumaged Black-tailed Godwit, two Curlews, 16 Oystercatchers, 36 Ringed Plovers and 30 Dunlins in various stages of 'dress'!

In the scrub alongside the estuary, and the grassland inland of the scrub, a number of warblers were singing away including twelve Willow Warblers, two Blackcaps, ten Whitethroats, two Grasshopper Warblers and two Sedge Warblers. When I first heard the Sedge Warblers I was a little surprised as the habitat wasn't quite right, but then I noticed they were singing in two small patches of reeds. It's amazing how birds find even small patches of habitat that are suitable.

Out on the river was a Whooper Swan that was swimming up and down, and feeding fairly actively. At one stage it was loosely associating itself with a group of six Mute Swans, but most of the time it was on its own. Given the fairly late date for a Whooper Swan, and the fact that it was on its own, I did wonder whether it was perhaps injured. However, later in the morning I saw it take off and head further downstream! 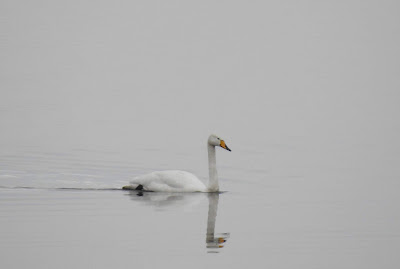 Other widlfowl on the estuary included 46 Shelducks, two pairs of Gadwall, two pairs of Mallards, a female Goosander and four Red-breasted Mergansers that flew upstream.

Four Little Egrets also fed in the shallows and I never get tired of watching these small, white herons, as they run and stop, dart and turn, all in the pursuit of food! 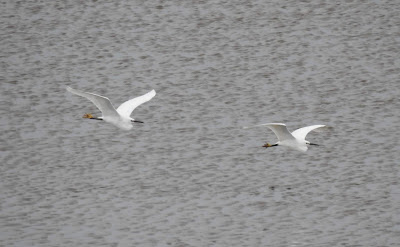 Some of the flowers/blossoms were looking particularly resplendent and personally I don't think you can beat a white flower against the green of the plant, like the Garlic Mustard and Hawthorn blossom below. 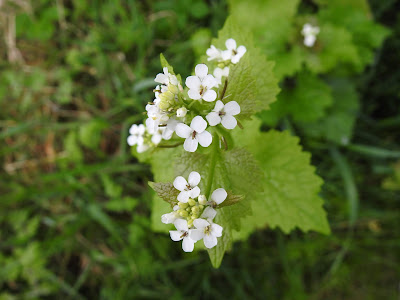 Garlic Mustard (above) & Hawthorn (below) 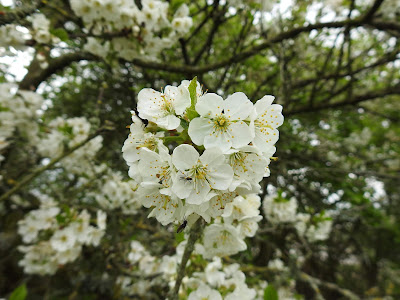 It was soon time to head south again and plan what to do over the three day weekend. I'll be sure to let you know!

Over on the right you will see that I have updated the ringing totals for Fylde Ringing Group up until the end of April. Six new species were ringed in April for the year and these were House Sparrow, Song Thrush, Willow Warbler, Pied Wagtail, Lesser Whitethroat and Mealy Redpoll. Below you will find the top three birds ringed in April and the top ten 'movers and shakers' for the year so far.