I was hoping that there would have been a few grounded migrants around yesterday morning, based on the previous night's Redwing movement and on the forecast. During darkness on Friday evening I kept periodically sticking my head outside to have a listen, and noted that Redwings were on the move. Combine that with easterly winds, clear skies and with cloud rolling in pre-dawn it looked like a recipe for a few grounded migrants, not the quieter than quiet morning that ensued!

I called at the Cemetery first of all and it was a tad cold with 7 oktas cloud cover and a 10-15 mph south-easterly wind. I mention the fact that it was a tad cold because sometimes it has to warm up a bit for migrants to start 'jumping about'!

So far so good, except the wind was south-easterly rather than easterly, but that wouldn't matter. Was there any grounded migrants? Answer; not really! A few excitable Robins, 8, and Dunnocks, 5, but that was it. I then headed to the coastal park, and met Ian, and again that was quiet other than three Goldcrests and a flock of six Mistle Thrushes that dropped in. 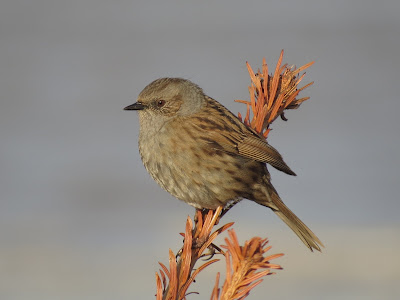 Over both sites there was a little vis and this included six Meadow Pipits, three Chaffinches, three Redwings, a Song Thrush (with the Redwings) five Goldfinches, four Linnets, 460 Pink-footed Geese (all NE), two Grey Wagtails, and an Alba Wag. An immature male Sparrowhawk shot through the vegetation of the Coastal Park and that was it! 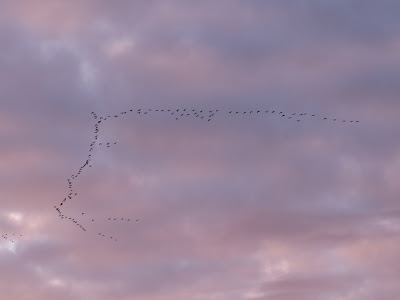 Lots of observers in the northwest have been commenting on the low numbers of vis and a lack of grounded migrants. Along the east and south coasts of the UK birders are recording large numbers of birds, and it has been a record breaking year for Meadow Pipit numbers at many sites, but not here. We can only speculate as to why this is, and probably more of the Autumn needs to unfold before we can make any informed guesses as to what is going on.
Posted by The Hairy Birder at 11:53