Alice and I checked our two Spotted Flycatcher nests in the Hodder Valley in Bowland yesterday evening to see how they were progressing, and to check if the chicks were big enough to ring.
In the first nest we found three healthy and large chicks, which under the British Trust for Ornithology's (BTO) Nest Record Scheme (NRS), would be coded as FL; primary feathers large - more than 2 thirds emerged from the sheath. We ringed these three stonking youngsters, and placed them back in the nest. And in probably a week's time they will set off on their journey to tropical Africa. Amazing! 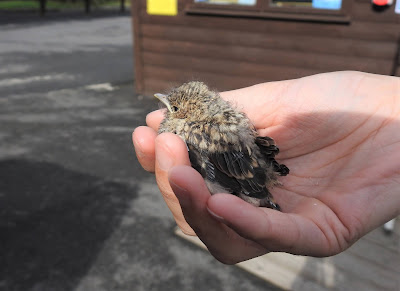 Spotted Flycatcher chick (above & below) 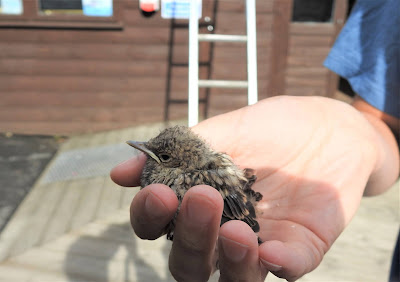 The second nest is only 40 metres form the first, as the Spotted Flycatcher flies, and that made me wonder whether Spot Fly's were polygamous. A quick check of the Handbook of the Birds of Europe the Middle East and North Africa - Volume VII - Flycatchers to Shrikes told me that they are typically monogamous. In a three-year study in West Germany of 151 nests, there were only three cases of polygamy, and the individual birds that were polygamous, bred monogamously in other years of the study.

It's the first time in a while that I've lifted a volume of
BWP down from my book shelf
As we approached the second nest, the female slipped away, and a quick check revealed three very small chicks and one egg, so they had probably hatched that day. So, a return trip is in order next week, and I'll provide a 'Spotted Flycatcher Update - Part 3'.
Posted by The Hairy Birder at 12:05