At 5 o'clock yesterday morning, from a soundscape perspective, it felt like Autumn, as there were several 'ticking' Robins as I put the nets up in the reedbed and scrub at the Obs. However, the temperature made it feel like the height of summer, as already it was 18 Celsius even at this early hour. The plan was to have a short ringing session, and I mean short, because of the hot conditions. The session was indeed short, as unsurprisingly, the bird activity reduced as soon as the sun was fully up, and the temperature started to climb. Birds, like us thermoregulate, and become less active when it is hot to regulate their body temperature. And that is why I wasn't planning to catch and ring any birds when the temperature increased. So, I had a pleasant couple of hours under clear skies, with no wind, and acceptable warm temperatures.
As I was driving through the site and unlocking the gates, I could hear a Grasshopper Warbler, I was going to say singing, but I should probably say 'reeling'. Singing or reeling, it was the first one I had heard on site since spring. Whitethroats, Sedge Warblers and Cetti's Warblers were all singing as well.
The Starlings were up earlier this morning, and I wondered whether it was because of the high temperatures. I aim to get to the site at the same time every time in relation to sunrise, and usually I have put the nets up, and I'm back at the ringing station before they exit the roost. This morning the numbers looked to have increased, and I would say that there was somewhere in the region of 6,000 birds. They even did a reverse murmuration over the reeds before heading off east to foraging areas.
I was sat at the ringing table processing some of the birds that I had caught, and I heard a 'whoosh' of wings. I looked up to see a Peregrine pulling up from a stoop, and then there was a thud as it hit a Woodpigeon! This was followed by a cloud of feathers (shock moult to confuse predators), and the Peregrine flew on. I saw the Woodpigeon drop down, presumably into cover. What a spectacle!
The water level on the scrape is now very low because of the dry conditions, and I noticed that the invasive non-native species (INNS) New Zealand pygmyweed Crassula helmsii, has started to take over again after we held it back for a while when we cleared the scrape. Out on the dryish scrape were nine Moorhens (6 juvs), eight Coots (5 juvs) and three Mallards.
I ringed ten birds as follows (recaptures in brackets):
Great Tit - 1
Sedge Warbler - 1
Robin - 1
Blackcap - 4 (1)
Blue Tit - 1
Whitethroat - 1
Wren - 1 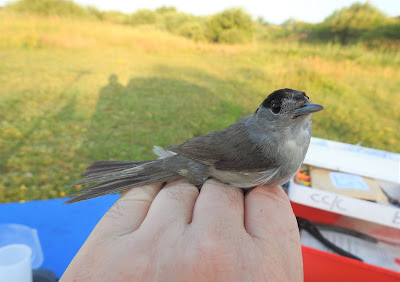 Blackcap
It's looking okay for ringing tomorrow, but it is remaining hot, so it will be another short session.
Posted by The Hairy Birder at 12:14