Gail and I checked the two Spotted Flycatcher nests at our Bowland site in the Hodder Valley yesterday morning, and the results were mixed. The first nest, above the door to an office/shop, had three warm eggs in it, and therefore the eggs were being incubated by the female. So, this was good news. 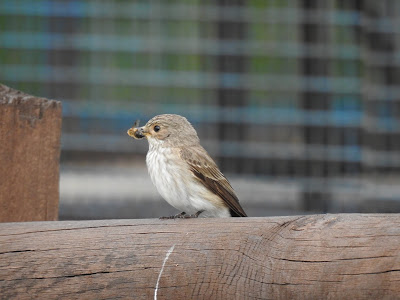 Spotted Flycatcher
The second nest, which is on top of a beam in an open, lean to shelter/building, had three eggs, but they were neither cold or warm. The owner of the site sent me a picture of this nest on 1st July, and there were three eggs in then, so it's not a case of the female not finishing laying yet. It's possible that for some reason the nest has been abandoned/deserted, with the most likely reason being that something has happened to one of the adults, or it was just a case that the female had been off the nest for a while when I checked it. We will go back in a week or so's time, and we'll know for sure then.
Today we received details from the British Trust for Ornithology (BTO) of the recovery of two of our birds. On the face of it, they weren't over-exciting, but they do tell us a little bit about the migration of these two species, and particular their use of 'stop-over' sites on their way south in the autumn.
Both birds were ringed at the Nature Park/Pools within the Fleetwood Bird Observatory recording area, and controlled (caught by another ringer) at Middleton Nature Reserve near Heysham, by Alan and his team.
The first is a Reed Warbler that we ringed on 30th August 2020, and it was controlled at Middleton NR on 28th June 2021. The second is a Lesser Whitethroat, that we ringed on 10th September 2020, and it was controlled on 28th June 2021. The distance travelled is only 16 km, and the direction is north-northeast. See Google Earth image below. 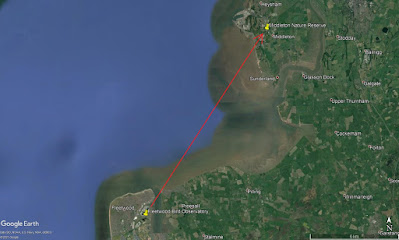 (Click the image to enlarge)
As I said before, not overly exciting in terms of the distance travelled, but we have had several exchanges between the Nature Park and Middleton NR over the years. Sometimes, it has been a case of the birds being ringed at Middleton NR and we have controlled them, but often it is the case of the above Reed Warbler and Lesser Whitethroat.
The dates when these two individuals were ringed, show that these birds were undoubtedly on their return autumn migration when we ringed them (30th August and 10th September), and when controlled at Middleton NR were at, or close to their nest sites. This demonstrates the importance of stop-over sites during migration, where birds can refuel before the next leg of their journey. These birds may well have stopped off at other sites, but because ringing only takes place at a few sites, these other sites will remain unknown. However, what is does tell us though, is that we need to make sure that there are pockets of suitable, invertebrate rich, habitats scattered throughout the wider landscape. And as climate change bites, these pockets of habitat will become even more important as adaptation against the effects.
Talking about climate change adaptation, I read in a recent volume of British Wildlife that a new project is using one million seeds to establish 20,000 square metres (2 ha) of seagrass Zostera meadow off Pembrokeshire in Wales. Seagrasses rapidly absorb and sequester atmospheric carbon and provide seabed habitat for marine life. So, a win-win all round!
Posted by The Hairy Birder at 14:02