I ringed a Cetti's Warbler on Wednesday (27th) morning, in fact I ringed eleven birds in total at the Nature Park, but more of that later. The Cetti's gave me a real buzz, they always do, even though we have ringed five already over the past couple of weeks.
Cetti's Warblers were first recorded in Britain as recently as 1961, as part of a range expansion across northwest Europe. Colonisation, which began in Kent in 197273, continued to be monitored annually until 2016 by the Rare Birds Breeding Panel, which gives an indication as to how scarce a breeder they were until recently.
In Lancashire, the first Cetti's Warbler was recorded in 1990, and in The Birds of Lancashire and North Merseyside published in 2008, its status in Lancashire is described as a vagrant from southern Britain or western Europe. How things have changed, but only recently.
We started ringing at the Nature Park in 2005, and we caught and ringed our first Cetti's Warblers there in 2010. There was a gap until 2013, and we have ringed them annually since then. See table below.
You can see from the table, that numbers ringed, steadily increased until 2019, and they now seem to have levelled off. It will be interesting to see how many we ring this year. 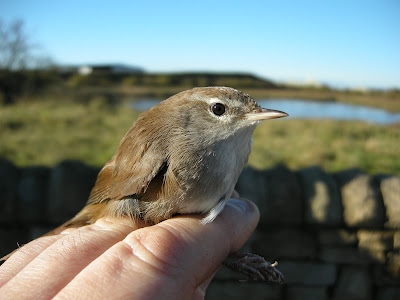 This is the first Cetti's Warbler that we ringed in 2010!
Climate change is the probable cause of the population increases and range expansion of Cetti's Warbler, following the initial colonisation of the UK. A Cetti's Warbler was recorded at Mersehead RSPB in Dumfries and Galloway in April of this year, which is unsurprising as they had reached the Solway on the Cumbrian side. A slow, climate change induced spread northwards through suitable habitat in Scotland now seems very likely.
A few days ago, we received notification from the British Trust for Ornithology (BTO) that one of our Cetti's Warblers had been controlled (caught by another ringer) near York. Cetti's Warbler AKN3992 had been ringed by me on 14th November 2021 at the Nature Park, and I had aged it as a 1st calendar year bird, meaning it had been hatched that year. Ringers at Wheldrake Ings Nature Reserve near York, some 137 km east, recaptured AKN3992 as a female with a brood patch on 22nd July 2022! I suspect that when I ringed it last November, it had moved west from the York area where it had probably hatched, and was wintering in Lancashire, before returning to the York area to breed. See Google Earth image below. Cracking stuff! 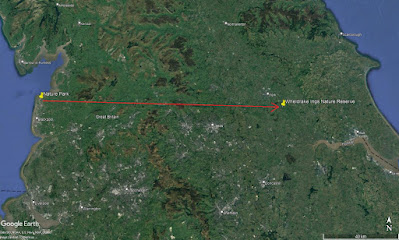 'Click' to enlarge
I mentioned at the start of the post that I had ringed eleven birds on Wednesday morning, and these were as follows:
Robin - 3
Reed Warbler - 2
Cetti's Warbler - 1
Blue Tit - 2
Goldfinch - 1
Willow Warbler - 1
Blackbird - 1 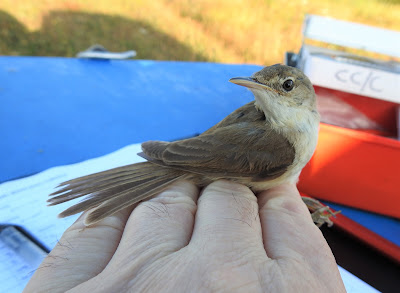 Reed Warbler
As before it was very quiet birding-wise. I thought somewhere in the region of 5,000 Starlings exited the roost, but had they dropped by a thousand since my last post? I'm not sure, I think it's more a case of the accuracy of the guestimate! The only other thing worth mentioning was that I heard at least a couple of Whimbrels calling from the estuary, so I must have a wander down one morning soon.
I have just stepped indoors after spending about fifteen minutes watching 72 Swifts above our house and garden feeding on flying ants, and what a joy it was!
The flying ants fly so slowly, and I could see hundreds of them through my bins, that the Swifts were having to adapt their feeding technique accordingly, so they could catch some.
Swifts are built for speed, as their name suggests; long, pointed, swept back wings, powerful flight muscles and a narrow tail, all add up to a high speed, high performance hunter of aerial insects.
Not so tonight! They were bringing their wings forward, and fanning their tails in attempt to create more lift to enable them to fly more slowly. The flying ants were easy prey, but the Swifts were almost not slow enough. It was certainly a spectacle, and long may it remain so.
Posted by The Hairy Birder at 19:40