In just about as many days, I have completed four different survey, or monitoring, types. A couple were for paid employment, and the other two, I like to class as voluntary work, but all were immensely enjoyable!
Survey number one, was my last breeding bird survey of a block of arable land that I have been surveying all year, and it was the sixth BBS at this site. The guidelines for breeding bird surveys have changed.

Six visits is considered sufficiently robust to identify the majority of bird species using a particular habitat type in the breeding season, and establish a good understanding of the numbers and distribution of species present. Six visits is also considered to be a proportionate survey effort for all terrestrial and freshwater habitats.

The bird breeding season is generally acknowledged to occur from late February to early August inclusive, although the majority of breeding activity occurs between March and early July.

Therefore, as a general framework, breeding bird survey visits should be spread evenly between late March and early July, in order to ensure that the surveys cover resident breeders which start breeding early, as well as migrant breeders which arrive later.

Generally, surveys of the breeding bird community should start between half an hour before sunrise and half an hour after sunrise. Surveys should typically be concluded by around mid-morning (10–11 am, with some regional variation) as activity levels (and hence detectability) of many species will have tailed off.

The guidelines state that consideration should be given to species which are active earlier or later in the morning, making sure that both are covered by the survey. Species vary in their detectability throughout the day, some may be more detectable after the main dawn chorus, and others may sing strongly shortly before sunrise or shortly after sunset (e.g., Black Redstart), so survey timing may need to be tailored to suit certain potential species, or varied between visits to increase the potential to detect a full range of breeding species.

As species vary in their detectability throughout the day, at least one of the six visits should be in the evening (i.e., during the last few hours of the day, and extending beyond sunset for at least one hour), to pick up species not readily recorded by conventional surveys early in the morning. Certain species call into the dusk and after dark. These include several common species (e.g., Robin) and some which can be difficult to detect during the day (e.g., Grasshopper Warbler, Nightingale, Nightjar and several owl species). Dusk survey visits also provide a good opportunity to identify roost sites.

The survey that I completed at this arable site, was a dusk survey, and Gail and I set off under 6 oktas cloud cover with a 10 - 15 mph north-westerly wind. As usual at this site, there were lots of Brown Hares, and we had at least ten individuals on our walk round. In some of the arable field margins we were putting up Meadow Brown butterflies, and we had somewhere between ten and fifteen. 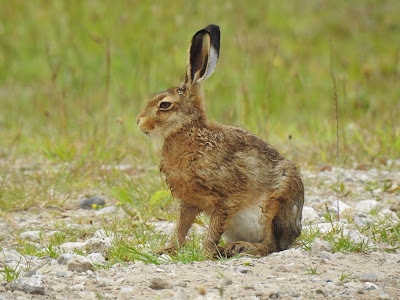 Brown Hare
It was fairly quiet bird-wise, but a few species kept us entertained. It's always a pleasure to watch Swifts, and we had at least fifteen individuals hawking over the arable crops for insects. Also foraging over the crops, and more puzzling as to where they were coming from, were at least eight Sand Martins. At this time of year, they will be busy feeding young, so these birds would probably have been coming from a colony relatively close by, but I couldn't actually think of one. I suppose the question is, how far do Sand Martins fly to forage for insects when they are feeding young, and the answer to this question would give an idea as to how close the colony would need to be.
There wasn't much activity on the fishing lake, but I suppose 88 Coots is noteworthy. Raptors were limited to a Buzzard and a male Sparrowhawk, and singing, territorial birds, not unexpectedly given the time of year, included just six Skylarks, a Chiffchaff, five Sedge Warblers, two Reed Warblers, a Blackcap, a Whitethroat and two Reed Buntings. 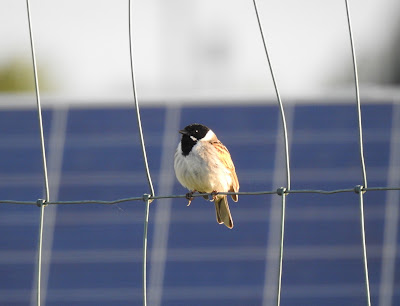 Reed Bunting (male)
I haven't run my moth trap for some time now, so it was a pleasure to use it in my garden a few nights ago, and I suppose that was survey type number two. The data from my 'hit and miss' moth trapping isn't very robust at all, but moths of course are very hard to survey otherwise, so knowing what species are occurring on a site, and in what numbers is probably as good as it is going to get.
I don't catch a huge number of moths, and also, I am not sufficiently experienced or expert enough to identify everything I catch, and I have to confess, that I don't do anything with the micros! Anyway, I trapped 17, or I should say I identified 17, moths of ten species as follows:
Large Yellow Underwing - 2
Bright-line Brown-eye - 3
Dark Arches - 4
Heart and Dart - 2
The Flame - 1
Clay - 1
Buff Ermine - 1
Marbled Beauty - 1
Common Wainscot - 1
Knot Grass - 1
At weekend I had the first ringing session of the autumn at the Nature Park, and this was survey type number three. Ringing is basically a mark and recapture method of surveying birds. You mark them, in this case ring them, and look to recapture them, or they are found, at a later date. And as I have said before, I see ringing as me 'putting something back' for bird conservation.
I arrived on site at 0445 under clear skies, and it was calm. As I was putting the nets up the Starlings were exiting their roost, and I estimated that there were at least 6,000 birds, and it was probably more. There wasn't a huge amount singing from the reedbed and scrub, just a Chiffchaff, two Cetti's Warblers, a Reed Bunting, two Blackcaps, three Sedge Warblers and three Whitethroats.
Whilst in the net rides I could hear a Sandwich Tern calling, but couldn't see it, and it made me think about the devastation being caused at Tern colonies, and other seabird colonies, by the latest highly pathogenic avian influenza H5N1 outbreak. At the moment it is mainly affecting seabirds, but there have been a few cases in some species of raptor e.g., Hen Harrier, and of course there are several cases in domestic poultry units. In fact, the disease has come from domestic poultry units in the far east, and has spread to wild bird populations. Once again, humans to blame. No surprise there! As bird ringers, we have been advised to carry out various biosecurity measures, which I am rigorously following, and let's hope it doesn't spread into more species groups, but I'm not hopeful.
I ringed 11 birds as follows:
Blackcap - 1
Cetti's Warbler - 2
Blue Tit - 1
Reed Warbler - 1
Sedge Warbler - 2
Greenfinch - 2
Blackbird - 1
Wren - 1 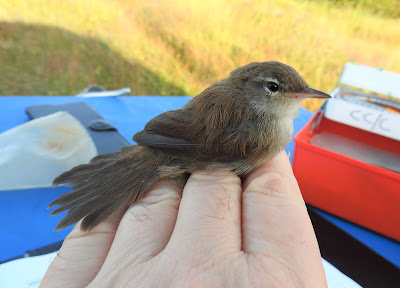 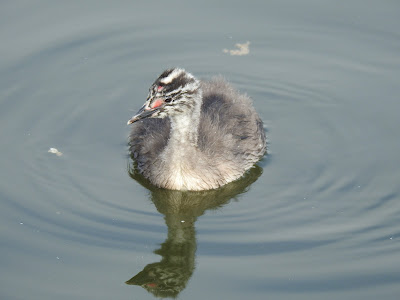 Great Crested Grebe chick
Yesterday I was in Bowland for survey type number four. I was surveying all the meadows on my client's farm, 19 of them, for Curlews. The meadows are due to be cut this week, and we wanted to make sure that all the chicks had gone, and I was happy to report that they had indeed all fledged. If I had found evidence of any chicks e.g., sightings of chicks, alarm calling adults etc, then the cutting date of that particular meadow would be delayed for 2 weeks, and then checked again before being cleared to be cut. It all helps to make sure that the maximum productivity is achieved.
Of course, when I was walking round, I made a note of anything of interest in my notebook, and I am going to just list what I recorded; six Siskins, two Tufted Ducks, two singing Sedge Warblers, three Willow Warblers, three Swifts and a singing Blackcap.
One of the meadows that I checked was on another block of land, adjacent to this farm, and it was here that I had the best two birds. First up, was a Spotted Flycatcher feeding in the empty farmhouse garden, and I always enjoy seeing a Spotted Flycatcher. The second decent bird, heard only, was in the form of several 'squeaky gate' begging calls of Long-eared Owl, emanating from suitable habitat. It sounded like that more than one bird was involved. Excellent!
As I spent all morning walking through meadows, I recorded a good number of Meadow Brown butterflies as meadow habitat is perfect for them and I had at least 80 - 90 individuals. In fact, the only other butterflies that I saw were a Ringlet and a Large White.
So, four very different surveys, but all very much enjoyable!
Posted by The Hairy Birder at 15:50