Tuesday morning saw me take to the hills in Bowland to carry out a site visit to look at the condition of two areas of species rich grassland. My client's farm is full of breeding waders as he farms exceedingly sympathetically to cater for them; he's amended some farming practises to reduce any potential impact on eggs and chicks, created habitat features such as scrapes to provide additional habitat and adjusted stocking densities to create the correct sward heights. He's a great bloke!

Walking between the two fields that I had to survey it was obvious that most of the waders had finished breeding. Nearly all of the Lapwings had gone and just a few pairs of Curlew and Oystercatcher were still about. I had an interesting first wader breeding record for the farm in the form of a Common Sandpiper. I can't claim any credit for discovering this as it was one of the farm staff that alerted me to it's presence. She told me that every time she drove past this particular stone edged pool she saw a wader species she couldn't identify. She also went on to say that she had seen the bird with chicks.

One of the fields that I had to check was adjacent to this pool and as I parked up in the gateway and got out of my car I heard Common Sandpiper alarm calling. And sure enough, at some distance, it was perched up on the fence. I suspect that the other bird was somewhere around the pool with the chicks. This is the first time in Lancashire that I have recorded Common Sandpiper breeding on a farm away from a water course. Great stuff! 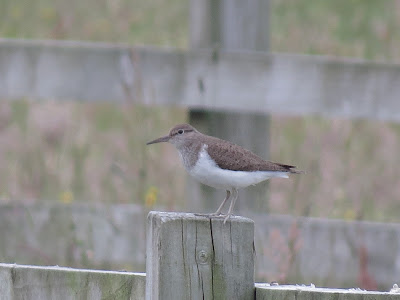 In addition to the waders a few Willlow Warblers were still singing from some of the woodland plantings and a Cuckoo was calling from an area that I had one or it earlier in the spring. The same pool where the Common Sandpiper was also had two broods of Tufted Ducks on and there looked to be at least four ducklings in each brood.

So a very enjoyable visit and I wish that all of my work could be like that!
Posted by The Hairy Birder at 09:19

Great narrative and kudos to this farmer and his enlightened attitude.

Thanks David. This particular farmer has a very enlightened attitude, and consequently he is great to work with :)