Gail and I had a second day of checking boxes on Sunday, but this time it was at our good friends Robert and Diana's farm near Nateby. We had three 'big boxes' to check; two Owl boxes and a Kestrel box. It was positive news for the box in the barn as it contained four healthy Barn Owl chicks ranging in age from 16 - 25 days, ish! The Barn Owls were duly ringed and we moved on to the other Owl box. 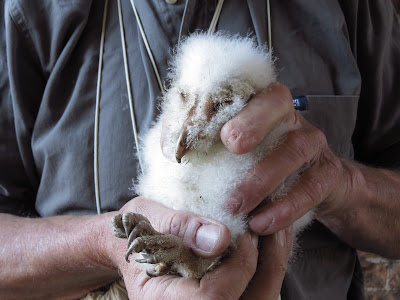 The Kestrel box in the wet woodland was certainly active and from a vantage point in the field we could see the female Kestrel sitting in the box. It is likely that she was brooding small young rather than incubating eggs, and as such we didn't disturb her. We will return in a week or so's time to ring the chicks.

Walking through a section of open woodland a Banded Demoiselle flew past which was a great sighting. Banded Demoiselles like slow-flowing, mud-bottomed streams and rivers with open banksides and adjoining meadows, and that description fits perfectly with this part of the farm.

Since we ringed the Barn Owl chicks on Sunday, today (Wednesday) is the first day that it hasn't rained and I must admit to be being a bit worried about them as the parents will have found it difficult, if not impossible, to hunt during the wet weather. Let's hope that they have managed to find enough food to feed the chicks today, as I do wonder about the survival prospects for the youngest chick!
Posted by The Hairy Birder at 18:23