On Sunday afternoon I found myself at my good friend's Robert and Diana's farm near Nateby with a brood of Kestrel chicks to ring. I'd checked them about a week earlier and they were just too small to ring, so hopefully after a week they would be big enough.

One of the diversification enterprises that Robert and Diana have on their farm is a small camping and caravan site and when we went to ring the Kestrel chicks we were joined by a small group of keen, wildlife enthusiast campers. I climbed the ladder and looked into the box and I was greeted to the sight of five healthy Kestrel chicks. They were still covered in grey fluffy down, but had started to grow tail and primary wing feathers. The other thing I noticed straight away was the number of mammalian prey items in the box and it was obvious that the parents birds were finding plenty of food and the chicks couldn't keep up with supply! It is a good vole year this year so fingers crossed it should be a good breeding season for Kestrels nationally and also Barn Owl, Short-eared Owl etc.

I haven't any photographs of the Kestrel chicks I'm afraid as I was too busy ringing the five chicks and also letting the enthusiastic group of campers quickly get some photographs before returning the chicks to the box. They all thoroughly enjoyed the experience of seeing the Kestrels ringed and the opportunity of seeing the birds close up, which is privilege that we as ringers sometimes take for granted.

We then had a walk down to the wetland and on the way along the woodland edge we noticed quite a few Red Admirals. In the immediate area there was a lot of nettles that are the food plant for Red Admiral caterpillars. 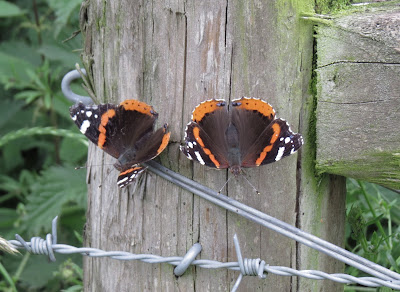 There was nothing on the wetland other than a few House Martins and Swallows hawking over it for aerial insects, so we headed in to the woodland to have a look at the outdoor classroom in the woods. One of the other things that Robert and Diana do is to facilitate school visits to the farm where the children learn about the link between farming, food production and the environment, but they also learn some basic outdoor survival skills and are encouraged to identify some of the wildlife found in the woodland. Great stuff!

As you might expect a woodland in late June in the middle of the afternoon is going to be quiet, but a singing Chiffchaff, a confiding Treecreeper and a Jay found their way into my notebook!

The following day I had a 4:00 am alarm call (ouch!) to carry out a plantation woodland bird survey in the North Pennines not far from Kirkby Stephen. It was a glorious morning with clear skies and calm conditions. Nearly everything I recorded during the survey was a juvenile; spotty Robins, gingery Song Thrushes, more green than blue Blue Tits and short-tailed Swallows!

Other bits and pieces included six Goldfinches, a Linnet, a Great Spotted Woodpecker, four Willow Warblers, a Siskin, a Buzzard, a Grey Wagtail, a Lesser Redpoll and a Stock Dove. Oh, and at least seven Brown Hares!

Since then it has rained and I've remained indoors, but I've got another bird survey Friday morning before hopefully some birding on the patch at weekend!
Posted by The Hairy Birder at 15:45

What a contrast; butterflies on barbed wire. Great shot!

Thanks Carol. I never thought about the butterflies on barbed wire contrast :)