It's at this time of year that a lot of birders almost hang their bins up! Some switch their attention to dragonflies or moths, and some just go in to complete hibernation until autumn. However, there is always something of interest and it's just a matter of being out there to chance upon it. I have a broad interest in natural history, so being out in the field is just, well being out in the field and enjoying whatever you are looking at or listening to.

I completed two bird surveys this week to earn a crust. One was to do with planned development and the other was conservation based. But, both were equally as enjoyable! My planned development related survey was in lowland Lancashire on some fairly ordinary farmland, whatever that is?! I was stopped at one of my vantage points when I heard a Raven calling from behind me. It's loud croaking call got closer and closer until I picked it up flying directly over me. It then proceeded to do a roll as it flew away from me, followed by a 'stall' and it was away in the distance. Magic!

I had a few bits and pieces in addition to the Raven including two Buzzards, 27 Magpies, two Reed Buntings, ten House Sparrows, a Sedge Warbler, two Whitethtoats, eight adult Lapwings plus three chicks, 21 Jackdaws, two Song Thrushes, a Blackcap and a Stock Dove. And I also had plenty of Red Admirals, Small Whites and Small Tortoiseshells on the wing.

My second survey was another survey of plantation woodland in the Eden Valley. The highlight of this survey was finding a Buzzard's nest with at least two chicks in it! The best of the rest was eleven Tree Sparrows, seven Willow Warblers, two Blackcaps, three Redstarts, a Jay, a Great Spotted Woodpecker, a Sedge Warbler and a Stock Dove. 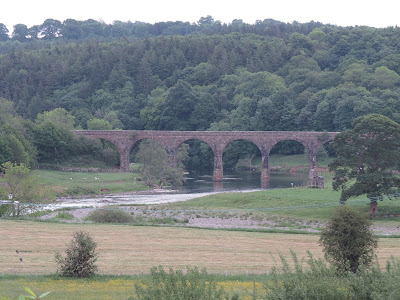 So, birding doldrums? I don't think so!
Posted by The Hairy Birder at 15:24