I make no apologies at all for posting some more on Pied Flycatchers as Gail and I checked our boxes again in the Hodder Valley yesterday. A few boxes no longer needed checking because they were still empty or hadn't progressed from a half completed nest for example, but we had a few birds to ring so it still took us a couple of hours. 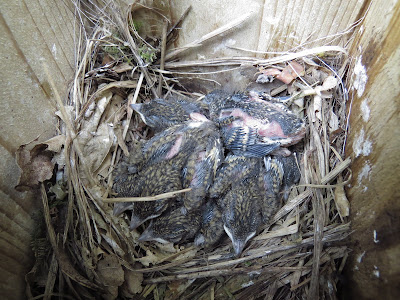 In total we ringed 49 birds made up of 32 Blue Tits, 14 Pied Flycatchers and three Great Tits. All were chicks from the boxes, and next week we should have something like 60 Pied Flycatcher chicks to ring! The clutch sizes of the Tits have been very small and this is certainly a phenomenon of recent years, and perhaps indicates the difficulty the adults are having finding food for their chicks. Climate change is certainly playing a roll in this with the hatching of young out of sync with the hatching of foliar feeding caterpillars. In addition to this cooler, wetter springs are reducing the number of invertebrates available as well. 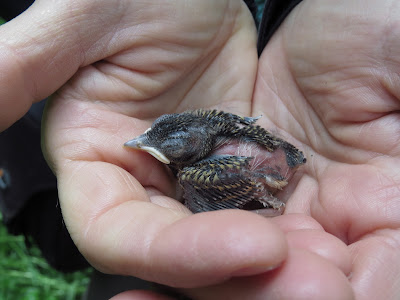 On our walk through the woodland checking the boxes we picked up a Tawny Owl flying through the treetops, and judging by its laboured flight we assumed it was a young bird. It was given a hard time by numerous woodland birds as it moved from tree to tree!

I received a bit of bad bird related news yesterday when Ian phoned me in a state of shock to tell me that the local tip was being moth-balled for a couple of years at least! Being much more of a 'Laruphile' than me Ian really was gutted to say the least, and we both lamented the prospect of a Gull, particularly 'white wingers', light winter at the Obs this winter! I suppose it's only a birder that could mourn the closure of a landfill site!
Posted by The Hairy Birder at 18:10

Interesting post as always, commiserations on the land fill, I know how you feel.
All thebest Gordon.

Thanks Gordon. Like I said it's only a birder isn't it who could mourn the closing of a landfill site!