Where Did That Rain Come From?

I set out at first light to walk the farm fields at the southern end of Fleetwood Obs and it started to rain as soon as I set off. I wasn't too bothered about the rain whilst checking for grounded migrants, but I knew that where I looked at the sea at this part of the Obs it didn't afford any shelter, but thankfully it had stopped by the time I got round to that bit! After the rain had stopped I still had full cloud cover with a 15 mph ENE wind.

The first migrant I had was a Chiffchaff singing from the herb garden and this was quickly followed by a Willow Warbler singing from the copse. It was obvious that there had been a bit of an arrival overnight as I soon added five Whitethroats, five Sedge Warblers, two Grasshopper Warblers and a Lesser Whitethroat to the grounded migrant tally. 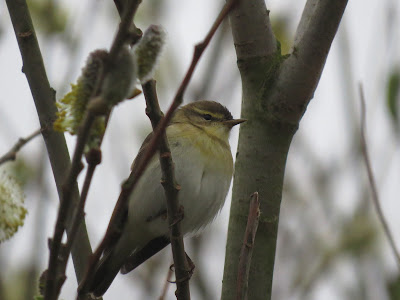 Even though it was a bit drizzly and murky at first there was some visible migration (north) and I had a Linnet, 16 Meadow Pipits, 48 Swallows, a Tree Pipit, 17 Lesser Redpolls, two Alba Wags, six Sand Martins, five Goldfinches and a House Martin.

The most curious bird was a Great Spotted Woodpecker that I put up close to the central hedgerow, that then flew north and I lost it over the houses. There is a lack of woodland within the Obs recording area and 'Great Spots' are relatively scarce, so I am guessing it was a migrant as there is still other early stuff on the move such as Meadow Pipits.

Before heading home I bobbed in to the cemetery and had three grounded Willow Warblers. I've got bird surveys and site visits every morning this week, so won't be able to get back on the patch until weekend.
Posted by The Hairy Birder at 19:03