I have had a full week of 'stupid o'clock' alarm calls to head up north to Cumbria to complete the second surveys of the plantation woodlands that I am surveying for birds. On Monday Gail joined me at an upland site where there are tremendous views of the Solway and over to the Criffell in Dumfries and Galway.

These second surveys tend to be the quietest of the three as they are at a time where a good percentage of breeding birds are feeding young. This site was no exception and the few highlights included a Song Thrush, a Chiffchaff, a Stock Dove, two Siskins, two Great Spotted Woodpeckers, a Buzzard, a Willow Warbler and a Blackcap.

An early start, means an early finish, so afterwards we had finished the survey we headed over to the Scottish side of the Solway to have a look at the seabird colony at Balcary Point. We did a four mile circular walk and we started the walk in the rain and finished it in glorious sunshine! 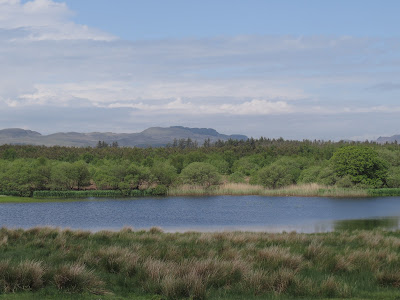 I completed three more bird surveys 'up north' and I have lumped the relatively interesting sightings together as the three sites were fairly close together; eleven Willow Warblers, two Chiffchaffs, a Yellowhammer, four Lesser Redpolls, two Skylarks, two Blackcaps, a Stock Dove, a Mistle Thrush and a Redstart. 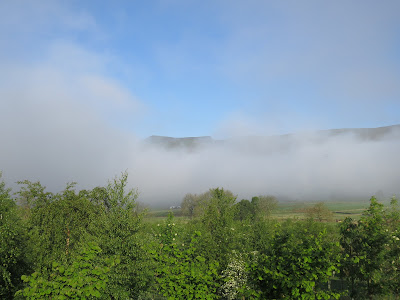 Blencathra peeping out of the mist.

We've got some hefty showers forecast for most of the day tomorrow, but if I can drag myself out of my pit at just a bit later then 'stupid o'clock' then I might get some birding in before the rain!
Posted by The Hairy Birder at 15:36

Looks like you had an intreresting trip to say the least, and even better North of the boarder.
All the best, Gordon.

All the best to you Gordon too!