Earlier in the week Gail and I checked our nest boxes in the Hodder Valley and it is looking very good for Pied Flycatchers. We definitely have eleven occupied boxes and they are all incubating completed clutches. I lifted a further three females off the nest and one was one of ours (ringed as a chick last year), and the other two were controls.

I was very interested in the good numbers of Pied Flycatchers occupying our boxes and through social media I asked other nest recorders if they were finding similar. Interestingly one local scheme reported average numbers as did a recorder from Wales, but mainly it would seem that most observers are reporting increased occupation. Several reasons have been put forward for this and include good over-winter survival, increased survival during spring migration and poor breeding success for Tits last year leading to less competition for nest sites. Interesting stuff!

A few chicks in our boxes were ready to be ringed and we ringed seven Nuthatches, 17 Great Tits and seven Blue Tits. Next weekend we will have more Blue and Great Tits to ring and hopefully I'll be able to record the remaining Pied Flycatcher females! 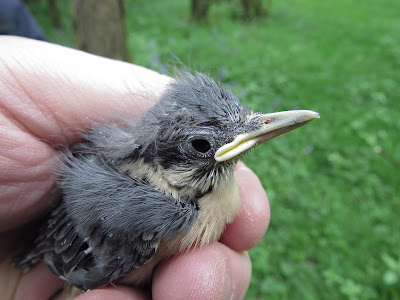 Nuthatch
Posted by The Hairy Birder at 18:24