Conditions overnight were clear and at 11:00 pm last night I was watching the Perseid meteor shower in the garden with Gail when I suddenly realised I needed to get to bed as I was up in less than five hours! The clear conditions led Ian and I to believe that it would be a 'clear out night', and it was to a certain extent, but there was definitely a small arrival this morning.

At first light we had clear skies with a 5 mph NNW wind and it was cool, a definite nip in the air! We put the nets up in one of the Obs reedbeds and retired to our cars for a coffee. About a dozen Alba Wags went over after exiting their roost, but their numbers were dwarfed by the twelve thousand (well about that anyway) Starlings that came out of another reedbed roost.

A Little Egret went over one way and a young female Sparrowhawk shot through the other. There was even a bit of 'vis' this morning with eight Swallows, two Swifts and 25 House Martins drifting south. A couple of calling Willow Warblers that avoided the nets were new in, and it was the ringing that gave us the real feel of there being a small arrival.

We ringed 16 birds as follows: 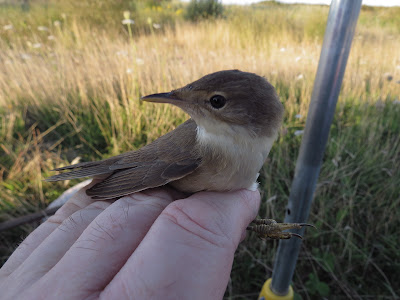 Yet again I'm playing catch up with work this week, and my plan is to try and clear everything by mid-late September and take the whole of October off to give the Obs a serious grilling for a month. But don't tell Gail!
Posted by The Hairy Birder at 20:24