A second day ringing on the bounce has been a rarity so far this Autumn at the Obs, but this morning Ian and I were back in the reedbed for the second morning in succession. At first light we were greeted with 6 oktas cloud cover and a 10 - 15 mph W wind.

Like yesterday, it was fairly quiet on the birding front. The Starlings were still late up from the other reedbed but this morning there was about 8,000; I probably missed half of them yesterday! A Little Egret overhead and a Kingfisher that zipped past and in to a mist net, was the best of the rest.

We ringed twelve birds as follows: 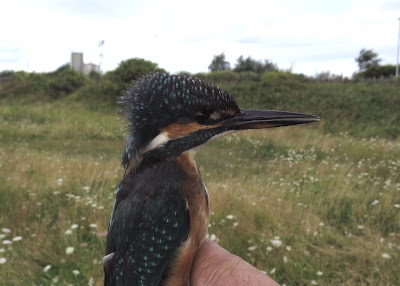 It's likely to be next weekend before I am back out on the patch again as I've a lot of work to get through this week, some of it entails site visits, so there might be something to report.
Posted by The Hairy Birder at 19:38