A Sprinkling Of Migrants

At first light Ian and I had our nets up in one of the reedbeds at the Obs and it didn't half feel quiet, but as it turned out there was a sprinkling of migrants. We had full cloud cover with a 10 mph wind that veered between westerly and southwesterly.

There was actually a bit of vis this morning in the form of three Grey Wagtails, a few Swallows (I didn't count them properly!), eight House Martins and two Swifts. The Swifts were getting late and once we cross over in to September they will be scarce indeed.

A few oddities included a Raven that headed vaguely north and a Kingfisher that 'zipped' through. If I was a betting man I would bet that it was the young female that we ringed a couple of weeks ago. There was a nice flock of 40 Goldfinches feeding on thistles, and when the sun came out for a bit later there were Speckled Woods and Brown Hawkers on the wing.

There was obviously a few migrants grounded as our ringing totals testify and we ringed 28 birds as follows (recaptures in brackets): 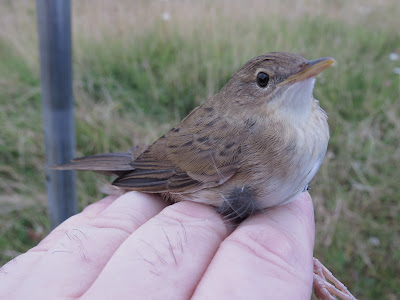 Surprisingly, or perhaps not, as a group we've ringed more Cetti's Warblers than Grasshopper Warblers at 35 and 25 respectively!

We'll be trying again in the morning and I'll let you know how we get on.
Posted by The Hairy Birder at 20:34