No Two Days Are The Same

The past few days have been rather chilly here in Lancashire, as it has been throughout the rest of the UK. My Canadian family and friends would say "you call that cold"? And I suppose they're right, our cold snaps thankfully don't last too long.

Having said that it was still cold when I was out surveying on Monday, in fact I had clear skies and it was very frosty. There were a few birds on the short stretch of inter-tidal mud flats that I had to survey, and on the associated fields. Waders included 238 Curlews, 155 Lapwings, 28 Redshanks, three Snipe and eight Golden Plovers. There was less variety among the wildfowl and I recorded 118 Teal, nine Shelducks and five Mallards.

Little Egrets were ever-present, but I only had two, the same as the number of Grey Herons that I recorded. A brief bit of pandemonium set  in amongst the waders and wildfowl when an adult male Sparrowhawk shot along the edge of the saltmarsh before diving into a hedge!

The cold weather had brought in a few Thrushes and I had four Song Thrushes, 21 Blackbirds (13 males), six Mistle Thrushes and 47 Fieldfares. The only other raptor I had was a Kestrel, and conspicuous by their absence were Pink-footed Geese as I only had one fly over in three hours of observation!

Yesterday morning saw me joining Phil and Andy at their Linnet ringing site. We put the two single panel nets up in the wild bird seed crop and we managed to ring 13 out of what was probably a flock of 100 birds. Interestingly they haven't had a single recapture all winter even though they have ringed 250 birds so far this winter, and the flock size has never exceeded 250 birds! It just shows the incredible turnover of Linnets there must be at the site. 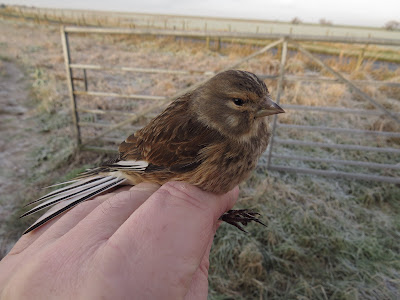 It's dreich outside as I type, but it's forecast to get colder and drier towards weekend again so hopefully I should be out on patch as well as surveying. Fingers crossed!
Posted by The Hairy Birder at 14:29