I mentioned before that when carrying out bird surveys you kind of get used to the site and it almost becomes familiar, rather like a local patch, but not quite. But you do gain a certain interest. One of my wintering bird survey sites is some improved intensively grazed pasture with a section of intertidal river thrown in, and 'that pond'. I've blogged about 'that pond' before, and to refresh your memory it is a fairly uninteresting pond, in an uninteresting field!

I was here again yesterday and it was a dull drizzly sort of day, but the weather held up enough for me to do my survey. As I approached the pond I could hear Teal calling and when I looked I could count ten, and they were very visible due to a lack of marginal vegetation surrounding the pond. Looking closer I could see two other ducks and they were a pair of Shovelers. Nothing remarkable, but I almost had that feeling of a patch tick! Come March I will have finished the surveys and those feelings will have subsided and the site filed in my memory. 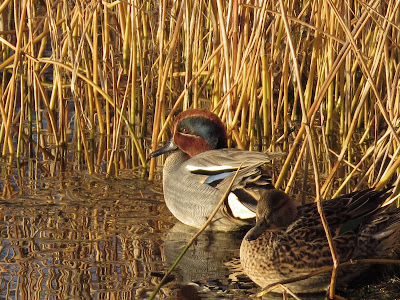 There did seem to be a few more thrushes around and a count up in my notes produced 13 Blackbirds, two Song Thrushes, 14 Fieldfares, 15 Redwings and two Mistle Thrushes.

I headed down to the river and in the hedgerow behind me a party of 15 Long-tailed Tits moved through and I couldn't believe how loud a Grey Heron's call was, as a bird called as it flew over the hedge next to my watch point. The tide was virtually in so all the waders had been pushed off, likewise the Little Egrets, but I did have a further 72 Teal. A Buzzard and a Goldcrest later, and I was back at my car.

The forecast for the next few days is a bit iffy, as per usual of late, so when and where I get out is up in the air at the moment!
Posted by The Hairy Birder at 21:15