On Tuesday I was undertaking one of the regular surveys that I do for a client on the wetland section on one of his farms. This particular farm is in Bowland, and is very much 'Corbie country' or it certainly was this morning.

A Corbie is a local name in the north of England for the Raven. Other names include Corbie Crow (Scotland), Croupy Crow (northern England), Fiach (Ireland), Marburan (Cornwall) and Ralph! 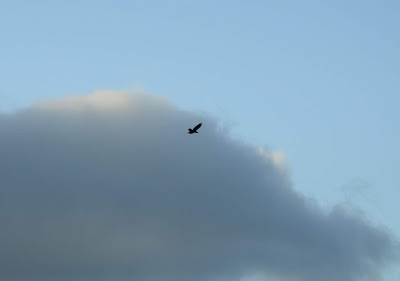 On my walk along the 'wetland corridor', under 4 oktas cloud cover with a light northwesterly wind, I recorded seven Ravens, or perhaps I should say made seven sightings as one or two sightings could have been of the same birds. I watched one particular individual flying along, calling away, and every few seconds it would do a complete roll, and keep on repeating the process until out of sight! My gut extinct was +that it was doing this out of sheer exuberance, but I suppose it might have been displaying to a bird that I couldn't see.

It is now Friday as I write this, and as usual I am behind with the Blog, but I have just had to run outside from my office because I could hear a Raven calling! I looked up and there it was heading south and trying to shake off a Carrion Crow that was mobbing it. There were two other Carrion Crows too, but they were leaving the Raven alone. An addition to the house list, I think! I say I think because I don't actually keep a house list, and perhaps I should, but I certainly can't remember having Raven from the house before.

I was intrigued as to how many species of birds I have recorded from my house and I have just added up and the Raven was number 65. I don't think that is too bad, although I am not sure what I am basing that on, and I am fairly certain that I have missed one or two.

Anyway, back to my 'wetland corridor' survey in Bowland. The only vis that I could detect were a few Meadow Pipits and Alba Wags heading north into the wind.

I had a few Brown Hares this morning, and it was a few, being just three. On this farm in the Spring I can easily see 20-30 over a relatively small section of it. 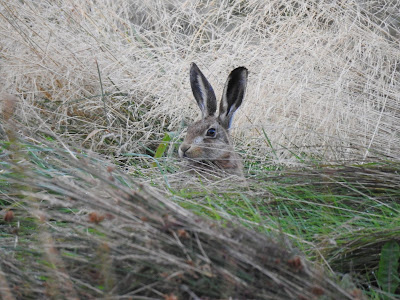 The wetland corridor that I survey consists of about a dozen ponds, of varying size, all forming a line through the centre of the farm. And I suppose they from the boundary between the higher unimproved area of the farm and the lower more improved section. The ponds are surrounded by different vegetation/habitat types at different successional stages, and some are relatively easy to view over and others very difficult.

Over all the wetland area I recorded four Moorhens, two Teal, 47 Mallards, three Mute Swans, a Cormorant and Little Grebe.

Best of the rest were a single Siskin over, a Chiffchaff, two Goldcrests, a Buzzard and a Roe Deer.

It was certainly a very slow morning, but a pleasure to be out as always!
Posted by The Hairy Birder at 11:01