Working Out The Vis On The Eastern Solway

Earlier in the week I was birding at what has become a semi-regular local patch for me on the Solway near Rigg, in Dumfries and Galloway. As I have hinted at previously, I hope that in the not too distant future it will become a more regular local patch! It's always interesting, even exciting, finding new local patches and trying to work out the dynamics of the site. A point in question is the 'vis' at this site. 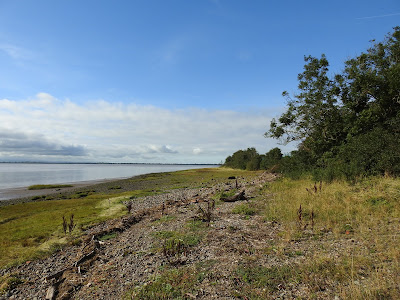 There was a bit of vis on this morning, the majority of it heading east/southeast. Birds seemed reluctant to cross the Solway, and I wondered if this is always the case, or is it bit like Morecambe Bay at the Obs and is weather dependent. On clear days birds will head south from Walney, completely missing landfall at the the southern mouth of the Bay where the Obs is, as we pick birds up at sea heading south. On less clear days, perhaps the majority of days when birds are on the move, we record birds heading east or west, in essence heading in and out of the Bay. The Solway is of course a large bay too, and maybe the majority of birds head in and out here as well. Hopefully time will tell!

I had four oktas cloud cover, with a light westerly wind when I parked my car overlooking the Solway near Rigg. I like to set my scope up first and have a look at the birds feeding on the shore, or drifting in and out on the tide. A number of Snipe were on the shore and I counted 25. I'm used to seeing Snipe flying away from me at the Obs as I put them up from one of the wetlands, so it was a pleasure to watch them feeding away.

Returning to the vis I had a few bits and pieces, moving mainly easterly as I stated above. Species on the move were two Grey Wagtails, 21 Meadow Pipits, eight Skylarks, four Swallows and a Tree Pipit.

There was a number of butterflies about either feeding from flowers on the edge of the merse, or on flowers on the merse itself. I counted three Red Admirals, seven Painted Lady's, a Green-veined White and two Small Tortoiseshells. Looking at these figures I can see that I didn't count everything, I was probably just enjoying watching them too much! 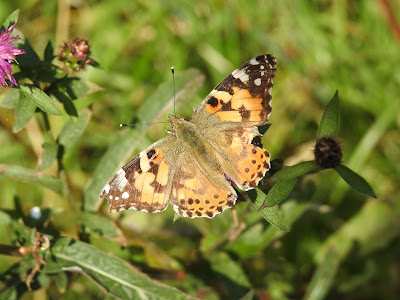 After a quick call to a local supermarket to purchase some Orkney Brewery ales it was time to cross back over the border.
Posted by The Hairy Birder at 19:54