On Friday evening I was faced with a dilemma as to which morning over the weekend to do some ringing at the Obs, as the forecast was reasonable for both Saturday and Sunday. In terms of wind strength and direction, it was marginally better for Sunday with a forecast 5 mph southeasterly wind, and for Saturday morning a 9 mph northerly! Normally I would have gone for Sunday, but Saturday morning would be the first morning for several days when it would be fit for some vis, and maybe the vis dam would burst!

I was at the Obs early Saturday morning unlocking and then locking the three gates that give us access to the ringing area in one of the reedbeds and Willow scrub. I was there a tad early, as I had to use my head torch to see to unlock the gates and to find the guy ropes to put up the nets! The day dawned with three oktas cloud cover and a 10 mph northerly wind.

A few Alba Wags went over heading north, rather surprisingly, until I realised that they were probably dispersing from an overnight roost at a chemical plant to the south of the site. I didn't hear any Swallows exiting their reedbed roost alongside one of the pools, probably as a result of the poor weather during the week breaking up the roost and preventing any further movement. The Starlings exited their roost in their customary late fashion, considerably later than sunrise, and they numbered at least 6,000.

There was some vis, but it didn't really start until a couple hours after first light, when it had warmed up. As it's early September the passage wasn't heavy, and as I was situated between the coast and the estuary the vis isn't always as obvious here. I had no more than a hundred Meadow Pipits head south and 46 Pink-footed Geese (my first of the Autumn), with a handful of House Martins, Linnets, Grey Wagtails, Skylarks and Swallows.

Grounded migrants were thin on the ground, and with the exception of a single Goldcrest, are probably reflected in what I ringed. I ringed sixteen birds (no recaptures) as follows: 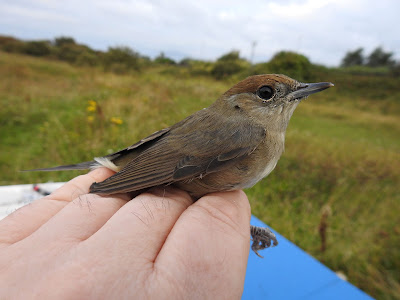 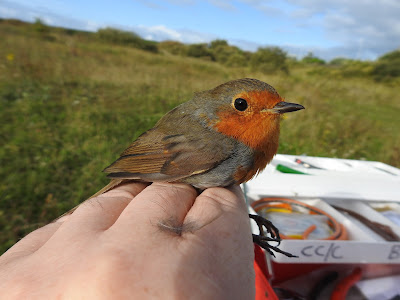 Not much else made it in to my notebook 27 Coots, four Little Grebes, seven Tufted Ducks, two male Pochards and a Cetti's Warbler.

I'll hopefully be birding on the Solway in Scotland on Tuesday after one of my surveys in north Cumbria. So I'll let you know if I do.
Posted by The Hairy Birder at 20:14