This particular farm straddles both side of a road. On the northern side of the road the farm is flat and all the land runs alongside the River Wenning. On the south side the land rises and overlooks the valley, and the picture below was taken from this vantage point when there was a mist first thing covering the land down by the river. 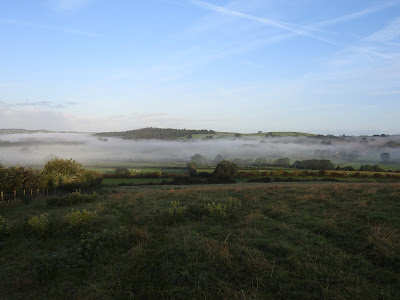 At this time of year bird activity in the hedgerows reduces, or becomes more localised at least, a quiet period between departing summer migrants and the arrival of continental migrants and winter visitors. The only warbler species I recorded were a single Blackcap, two Willow Warblers and a Chiffchaff. A nice flock of 19 Linnets were flying up from feeding in a field of fodder crop to the hedge if disturbed, and four Long-tailed Tits moved from a line of Ash trees to the hedge I was surveying, before turning round and heading back to the Ash trees to join the other larger group of extended Lottie family and friends!

During the two hours that I was surveying the hedges a number of Pink-footed Geese headed over and I had 30 NW, 85 S and 90 SW. I guessed that they were just arriving as they were very high, and were re-orientating themselves to head to feeding areas. 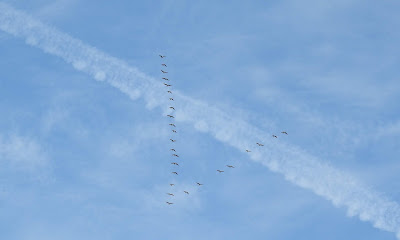 A few butterflies were on the wing, namely Painted Lady and Small Tortoiseshell. I recorded a few (13) Goldfinches along one of the mature hedges. They were feeding on a stoned area surrounding a gateway and livestock drinking trough, that was vegetating over with lots of pioneering seed bearing plants. And like the Linnets above, would fly to the hedge if disturbed. 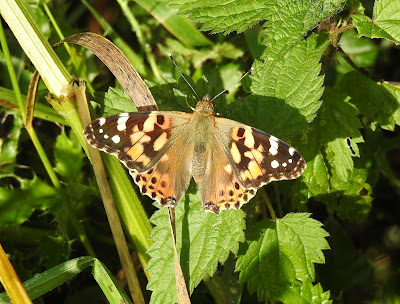 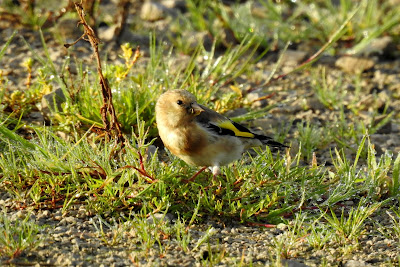 I've mentioned this before but it's been a good Autumn for berry and nut crops, and the hedges here were full of Hawthorn, Rowan & Guelder Rose berries, as well as lots of Hazel nuts! When our wintering Thrushes arrive there will be plenty of food for them! 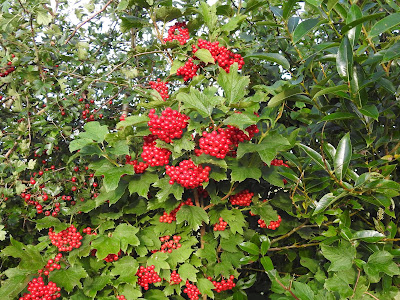 Yesterday I decided to have a walk down to the estuary at first light, and just like Friday is was nippy, woolly hat weather in fact, with clear skies and a cool southeasterly wind. Walking along the Hawthorn tunnel to the estuary I must have counted a dozen ticking Robins along with a good splodge of Woodpigeons and Chaffinches. 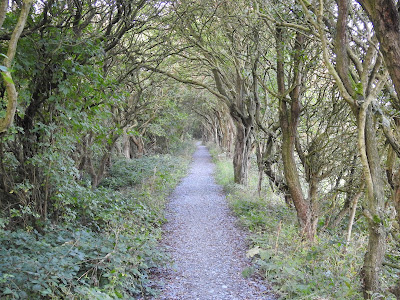 The Hawthorn tunnel passes a reedbed and a Cetti's Warbler could be heard giving that explosive call. Just like the Little Egret, being a birder of a certain age, Cetti's Warblers still give me a thrill when I hear one. The only other warblers I heard were Willow Warbler, a Goldcrest and a Lesser Whitethroat.

Pink-footed Geese were a feature of the morning here too and various 'Pinkie' action was going on with birds leaving their estuarine roost as the sun rose and other birds arriving to bathe and feed from roosts out in Morecambe Bay. These too would depart eventually and head off south. 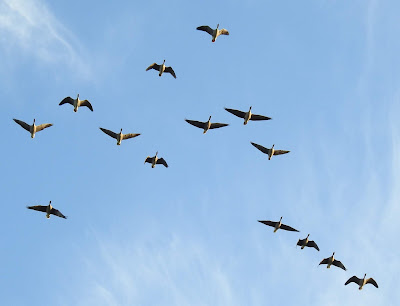 Waders feeding on the mudflats were few and far between and all I had were two Curlews, 22 Redshanks and 47 Lapwings. Other birds on the river included three Little Egrets, two Grey Herons, 263 Black-headed Gulls and seven Shelducks.

The first bird I saw on the reservoir by the river was a Kingfisher! I was just about to press the shutter on my camera and it flew off! Seven Little Grebes and 36 Tufted Ducks made it from the surface of the res into my notebook. On my walk back to my car a few Swallows, a couple of Grey Wagtails and four Skylarks headed south. 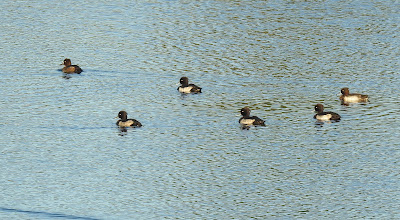 Talking of woolly hat weather, I've had our wood burner on a few times recently as well!
Posted by The Hairy Birder at 21:04