A Game Of Two Halves

Four days ago, I was over at my survey site on the Humber Estuary, and it was very much a game of two halves. The first half being the last of my VP surveys overlooking the estuary, as well as the site itself, and the second half being the first of two breeding bird surveys (BBS). As far as my Blog post is concerned, I won't be presenting it as a game of two halves, but that of a pleasant five and a half hours in the sun surveying birds!
It was cold at first with, a ground frost, clear skies and a light north-westerly breeze. In terms of looking over the estuary, it was low water, and there were a few birds feeding on the foreshore, but not that many. Shelducks have been a feature of my estuarine counts all winter, and this morning there was just nine birds spread out along the mudflats. 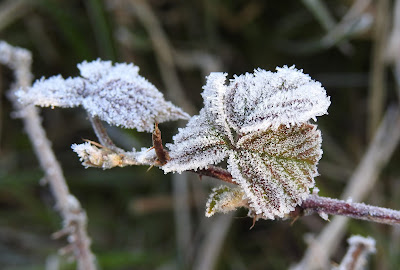 Frosty Bramble
A Grey Plover was nice to see, but it's a pity that it wasn't in summer plumage as you can't beat that black and silver spangly plumage! Four hundred and fifty Knots and 72 Dunlins headed downstream, but they were quite away out and flying in front of the morning sun, so I couldn't tell what plumage they were in. Other waders on the shore included nine Oystercatchers, a Whimbrel, 16 Curlews and twenty Redshanks.
I recorded four species of raptor this morning, which I didn't think was too bad. First up was a pair of Sparrowhawks that drifted west across the site, followed by a pair of Kestrels. I was watching the male Kestrel hovering in front of me, as I was looking on the estuary, and he suddenly dropped to the sea wall, and started calling excitedly. I looked up and he was on the sea wall mating with the female! 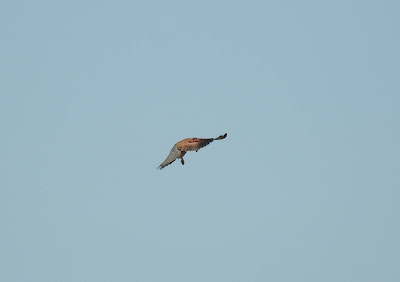 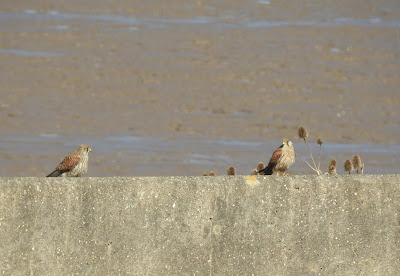 The third species of raptor was a Buzzard that flew north being mobbed by a Raven, which I think was another new species for the site. And raptor species number four was a Peregrine that motored northwest, coming in-off the estuary.
The vis was quiet, and it has been a quiet spring so far for vis, and in fact for migration in general. Swallows have been very thin on the ground and this morning I only had four heading north, along with two of their Sand Martin cousins. A Yellow Wagtail called overhead from somewhere in the stratosphere, and quite literally just a handful of Linnets and Lesser Redpolls also headed north.
There was a noticeable increase in singing warblers since my last visit, and I recorded three Chiffchaffs, four Sedge Warblers, four Blackcaps, two Whitethroats and a Cetti's Warbler.
I'm looking forward to my second BBS visit in late May, and maybe it will have warmed up by then!
I thought I would have a look at an old notebook, and on the evening of 22nd April 1987 I was at Shotton in North Wales watching a male Little Crake. If my memory serves me correct, it was at the site of an old power station where there was a series of reed-fringed muddy pools. My notebook states that I watched the bird down to 25 feet, feeding on a small muddy pool. The bill was a yellow to lime colour, with a reddy-orange base. The upperparts were a slate/blue grey. The under-tail coverts were white with brown striations, and the upperparts were streaked medium-dark brown. Sadly, I didn't take photographs then, but the bird is firmly locked away in the old grey matter, and in my notebook of course. The only other birds in my notebook for that trip, are two Short-eared Owls and a Grasshopper Warbler.
Posted by The Hairy Birder at 20:31