This will be a short Blog post.
Alice and I attempted a ringing session at our site in the Hodder Valley in Bowland, and it was cold and quiet. The wind was a sharp north-easterly, with relatively clear skies. In the arboretum it felt quiet, and that was because it was quiet, and there were very few birds around.
We ringed five birds (recaptures in brackets) as follows:
Robin - 2
Goldcrest - 1 (1)
Wren - 1
Lesser Redpoll - 1 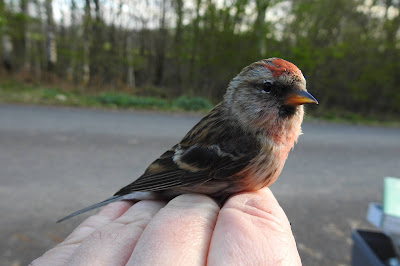 Lesser Redpoll
It's hard to come up with any birding highlights, but if pushed I would say that we had a singing Mistle and Song Thrush, four Siskins, a Great Spotted Woodpecker, a male Sparrowhawk and two Long-tailed Tits.
It's remaining northerly, or thereabouts, and cold for the remainder of the week. Later in the week I have two bird surveys to get in, so it will be interesting to see what I record, or perhaps more to the point, not record! I'll let you know.
Posted by The Hairy Birder at 19:51