Back In The Willow Scrub?

The plan this morning was to check the water levels in the reedbed and willow scrub at the pools at the Obs, after I had completed a Breeding Bird Survey (BBS) in an area of grassland and dry scrub nearby.
It was a bit cooler this morning, with a stiff easterly breeze and full cloud cover. As I have said in previous posts, it's been a slow spring this year, and there are a few species that I have yet to record, or they have only arrived in low numbers as yet. An exception to this is Blackcaps, and I have been seeing and hearing a number of Blackcaps this spring, and this morning I recorded six at my site, including four singing males.
I recorded two singing males of a cousin of the Blackcap, the Whitethroat, this morning, and they were my first of the Spring. Whitethroats have been missing, or they are certainly down in numbers, this spring, and let's hope that they are just running late, and the full force is yet to arrive.
A single Swallow zipped through, and this is another species that is causing concern this spring, and the plight of Swallows this spring even made it on to the Today programme on BBC Radio 4 this morning! The only other summer migrant that I recorded at my survey site was two singing Chiffchaffs.
The last bird I recorded at my BBS site this morning, was a Song Thrush, and the first bird that I recorded at the pools at the Obs was a singing Song Thrush. I didn't hear a single Reed or Sedge, but a 'reeling' Grasshopper Warbler was a pleasant addition to my spring arrivals. Two Cetti's Warblers with their explosive song drew a line under the warbler section. 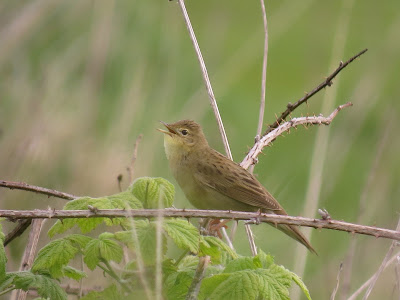 Grasshopper Warbler
I had my first two Coot chicks of the year, that were foraging on one of the pools close to a Moorhen that looked very incongruous, swinging back on forth, perched near the top of a handful of dead reed stems that it was grasping in its feet!
A Great Crested Grebe was actively feeding and being successful in its foraging attempts, whilst the other bird was sitting tight on the nest. Ten Tufted Ducks and the loan male Shoveler still graced the pools, and a Grey Heron was attempting to be as successful as the Great Crest at the back of one of the pools. 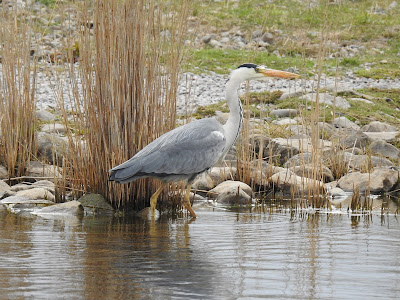 Grey Heron
I walked round to where we drive into the ringing area, unlocking the gate and checking that the padlock hadn't seized up over the winter. It has been very dry of late, and I wanted to see if I could get a net or two up in an area of Willow scrub that we don't usually ring in, but I thought might be dry enough to do so. It wasn't, but I did flush three Snipe looking!
I decided to try and walk in to the area that we usually ring in, and I nearly made it to the first net ride in my wellies. I didn't try and get any further, as I didn't want to 'over top' them with water as they're needed tomorrow on the Humber Estuary. It did get me thinking though, that we might get back in the willow scrub if we put waders on just to get to the net rides.
The net rides are slightly higher, and therefore drier, than the surrounding reeds and willows, so potentially with waders we could get to the net rides. The net rides tend to be drier at their northern end, and wetter at their southern end, where they slope ever so slightly towards the water. So, it might be a case of putting 40-foot nets up in the 60-foot rides, and a 30-foot net in the 40-foot ride. Either way, I am fairly confident that we will be back in the willow scrub at weekend having a ringing session!
Posted by The Hairy Birder at 18:28