Yesterday morning, I finally managed a ringing session at the Obs in the Willow scrub and reedbed, but driving there at 0500 alarm bells started ringing, as it was clear, very clear. In fact, so clear that there was an Autumnal nip to the early morning, with the temperature barely registering 10 degrees Celsius. It was what I describe as 'clear-out' conditions, in that any migrant birds on site will have departed in the clear conditions. A fellow student of migration, Alan, at Middleton (15 km north-east of my site as the migrant warbler flies) had commented on Tuesday that, conditions were far from ideal for ringing (as) it seemed that most birds had moved on during the last two clear nights.
I only put two nets up under the aforementioned clear skies, and a strengthening south-easterly wind. It felt quiet, and that's because it was quiet. I ringed six birds as follows (recaptures in brackets): 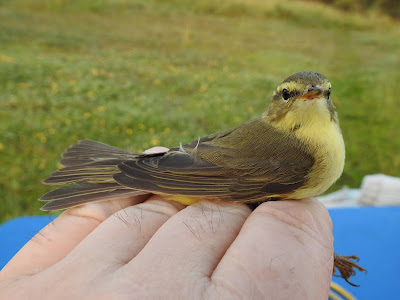 Willow Warbler
Most certainly 'chalk and cheese' compared to my last ringing session here when I ringed 54 birds!
There's an Atlantic low-pressure system moving across the UK from tomorrow through the weekend, so this will stir things up a bit. It will slow migration down over the next few days, so the secret will be getting the timing right, and getting out on the first decent migration morning after this, and in theory there should be birds about. We'll see.
Back to yesterday, and I have very little to report. The scrape has now dried up, so some rain over the weekend will be welcome, and therefore there were no birds on there. Grasshopper, Sedge and Cetti's Warblers were still singing, and there looks to be at least 7,000 Starlings in the roost now. A couple of House Martins, Swallows and Swifts were foraging for aerial insects later in the morning, and other than my first Lesser Redpoll for the autumn motoring south, that was it. Interestingly, late yesterday evening over the garden, high in the sky, I had a group of 15 screeching Swifts swirling around and chasing each other. Another sign of autumn.
Looking at one of my notebooks from 1982, on 3rd August 1982, I spent four hours birding at Marton Mere Local Nature Reserve. It was a pleasantly warm evening, with a light westerly wind. Looking at the list of species that I recorded, 41, two stand out because of their status, locally and nationally, today. They were five Corn Buntings, and two Grey Partridges with young. Two classic farmland bird species that have declined alarmingly, and both on the red list of the Birds of Conservation Concern (BoCC). 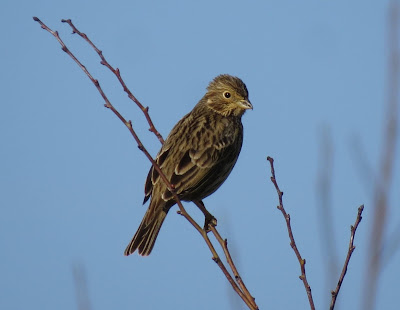 Corn Bunting
Corn Buntings declined very steeply between the mid-1970s and mid-1980s, with local extinctions across large sections of their range. The decline then continued at a reduced rate until around 2000, and numbers have remained fairly stable since then, but there have been no signs of recovery. Changes in farming practices are believed to have been responsible for declines, mainly through impacts on reduced seed and/or invertebrate abundance. In addition to this, a switch to autumn sown cereals, with the resultant earlier harvests, means that there is loss through the destruction of nets.
It's a similar story for the Grey Partridge, with steep declines over the same period, and sadly the BTO sates that the continuing decline shown by Common Bird Census (CBC)/Breeding Bird Survey (BBS), suggests that all efforts to boost the population in the wider countryside have so far been unsuccessful. And again, similar to the Corn Bunting, the main cause of decline is the deterioration of the bird's agricultural habitat. During the first couple of weeks of a Grey Partridge chick's life, they are dependent on invertebrate food, and this is now in short supply because of agricultural intensification.
I think as a young birder in the early 1980s I was perhaps blind to what was happening to some of our farmland birds, and looking back at old notebooks it reminds me of how widespread these birds once were, and how sad it is that it is now difficult to find these species. There are just pockets where they are hanging on.
Hopefully I will have some more positive news about another red-listed species later.
Posted by The Hairy Birder at 12:43