The Weather Plays The Joker

Many of you will face the same dilemma as me, trying to decide what the title will be for your latest Blog post, and today it was going to be 'Two 4 One', but the weather put paid to that by playing 'The Joker'. I was going to use 'Two 4 One', because I never got round to posting yesterday, and the plan was to do some ringing this morning, so I thought I would Blog about both days in one post, hence 'Two 4 One'.
I got up this morning at 5:00 a.m., and started to load a few bits of ringing gear into my car that I hadn't put in last night, and it was raining, nothing heavy, but a constant light drizzle. The forecast had advised me, that this morning there was just a 5% chance of any rain, that 5% must have been over me! I went back indoors, and gave it twenty minutes, and still the drizzle fell. So, I decided to call off my planned ringing session, and try again in the next couple of days.
Rewind to yesterday, when the weather had played the Joker card once more. In fact, it rained so much, that I was forced to abandon my seawatching position and retreat to my car, but not before I had recorded a few bits and pieces. Again, it wasn't forecast to rain.
Going back to the start of the morning yesterday, I walked along the embankment behind the sea wall at the coastal farm fields towards my seawatching position, and I had 7 oktas cloud cover, with a light north-westerly wind. At about 7:30 a.m. the wind picked up to a moderate north-westerly, and by 8:30 a.m., a squally weather front had moved in, and put paid to my seawatching.
At first the tide was quite a way out, but it is possible to seawatch here, even on a low tide. There were no terns or waders on the beach, mainly because of a gaggle of people fishing on the tide-line. There was very little vis this morning, probably as a result of the north-westerly wind, and on and off it was murky out in both Liverpool and Morecambe Bay. All I had were six Alba Wags, 17 Swallows and two House Martins.
The sea was similar to yesterday, with mainly just Sandwich Terns and Common Scoters on the move, but I did have a few other species. Species recorded under the 'seawatching' category included 229 Sandwich Terns, 24 Shelducks, 556 Common Scoters, three Gannets, 20 Cormorants and a dark morph Arctic Skua.
Waders were once again fairly thin on the ground, but I did have two Bar-tailed Godwits flying along the tide line, which has become a notable species in recent years, and the best of the rest were an Oystercatcher, three Turnstones, 19 Ringed Plovers, two Redshanks and a Curlew. 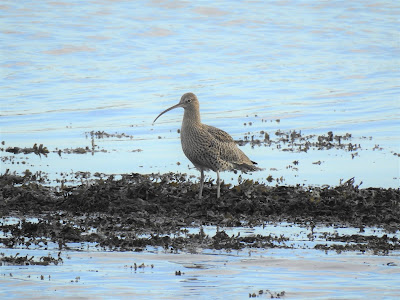 Curlew
The only grounded migrants I had were the five Wheatears that made their way slowly south feeding behind the sea wall as they went. 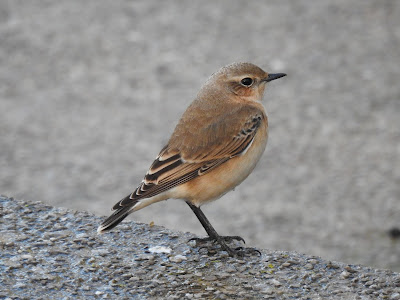 Wheatear
As I mentioned before, that squally weather front that moved in introduced some heavy rain, and that brought the morning to a close. The forecast is looking good for the next twelve days or so, as long as it doesn't decide to play the Joker again!
Posted by The Hairy Birder at 15:49