This will be the last Spotted Flycatcher update for this year, as yesterday evening Gail and I ringed the second brood of the second pair. When Alice and I checked them last week, there was one very small young and three warm eggs. Yesterday evening there was just two lively chicks that I would code 'FM' under the Nest Record Scheme (NRS), meaning that their primary feathers were medium; 1 third - 2 thirds emerged from the sheath. In about a weeks' time they will be off, and heading south to Tropical Africa.
Why there was just two chicks, I don't know for sure. It might be that two eggs were infertile and didn't hatch, or it could be that they did hatch and two of the chicks died. These two were very lively, and looked nice and healthy, so I am confident that they will fledge okay.
I didn't get any pictures of the chicks yesterday, well I did actually but they were out of focus, so I have recycled some previous ones below to illustrate this post. 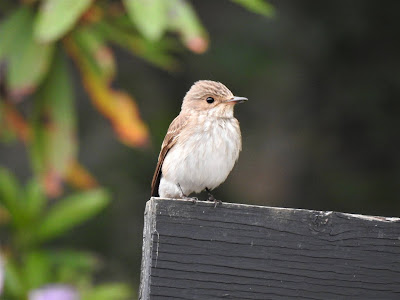 Spotted Flycatcher (above & below) 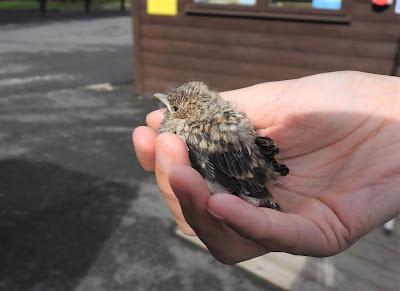 As I've mentioned before, Spotted Flycatchers are on the red list, and lifting directly from the BTO Bird Trends pages I can tell you that, Spotted Flycatchers have declined rapidly and consistently since the 1960s. It is among a suite of species that winter in the humid zone of West Africa and correspondingly are showing the strongest population declines among our migrant species.
Demographic modelling provides evidence that a decrease in the annual survival rates of birds in their first year may have driven the decline. The ecological causes of the decline are uncertain as good-quality, direct evidence is sparse. This effect on survival may operate in the pre-migration period, during migration or in the wintering quarters. The number of adult Spotted Flycatchers caught at CES ringing sites was found to have declined drastically, providing further evidence that post-fledging and overwinter survival may be important factors in the population decline.
Interestingly, and frustratingly, there is very little evidence for the ecological causes of the decline. It has been hypothesised that declines in large flying insects that are food to the flycatcher, or conditions either on the wintering grounds, or along migration routes may be involved. In short, we don't know. There certainly has been a greater decline in the lowlands of the UK, and upland areas have become more of a stronghold for Spotted Flycatchers. And my own observations over 45 years would support this. I no longer find nesting Spotted Flycatchers in lowland areas, but regularly encounter them in the uplands. This would fit in with the hypothesis that declines in large flying insects that are food to Spot Fly's are part of the ecological cause of the decline. There are certainly more invertebrates in upland areas where agricultural intensification has been slower. Whatever the cause of the decline, we need to turn it around before we lose these enigmatic little birds!
Posted by The Hairy Birder at 12:35