Perhaps plagued is too strong a word, but I was certainly visited by numbers of flying ants this morning whilst attempting to seawatch! They seemed to find my telescope attractive, and were continually landing on it and distracting me from the job at hand. I can only assume that they enjoyed the elevated position that my scope afforded them. I found that if I moved several metres north of where I wanted to be along the embankment, for some reason, the numbers lessened. So, I moved until the numbers were tolerable, and then they seemed to disappear, and I worked my way south back to where I was! The ants were attracting the attention of a few avian predators, and some of the Swallows that were heading south, were doubling-back to take advantage of this winged-protein snack, before continuing on their journey!
I was at the coastal farm fields at the Obs by about 6:15 a.m., and the plan was to seawatch on the incoming tide, and monitor any vis going over. That is, if there was any! I had full cloud cover, with a light south-easterly wind. In fact, it would have been calm enough to do some ringing this morning, but a few hours yesterday in a good friend's real ale pub put paid to that!
I had very few waders this morning, just a handful of Oystercatchers south and a Curlew north, and the most numerous was 36 Turnstones that were pushed on to the stone breakwaters as the tide ran in.
Plague proportions of flying ants aside, it was a continuing theme of quantity and not quality in terms of the seawatching. Only three species were involved, and these were 34 Cormorants, 124 Sandwich Terns and 713 Common Scoters (all south). 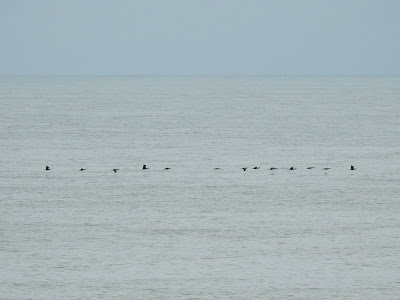 Cormorants
I mentioned earlier that some Swallows were moving south, and in total I had 58. The supporting 'vis' cast to the Swallows, included five Alba Wags, two Grey Wagtails, four House Martins, 15 Swifts and two Meadow Pipits. I did have a group of 16 House Sparrows go over also heading south, but I think they were just a feeding flock of local juvenile birds moving between foraging areas.
A Wheatear that slowly made its way south along the fence-line behind the sea wall, made it into the 'grounded' category of migrants, as did a fresh juvenile Whitethroat that I encountered in one of the hedges along the farm fields. 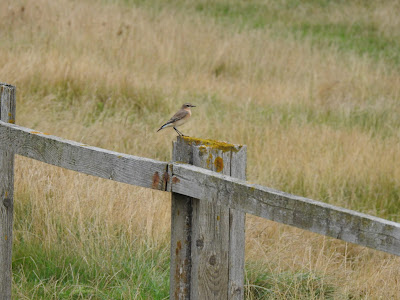 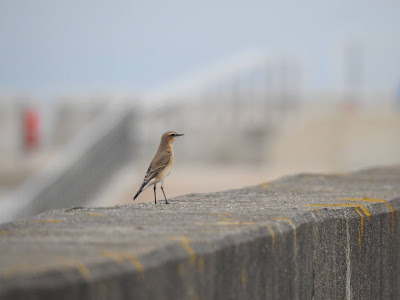 Walking back to my car I was serenaded, if serenaded is the correct word when referring to stridulation, by at least ten Roesel's Bush Crickets. They are fantastic looking beasties, but are more often heard than seen.
After I packed up here, I called in at the cemetery to see if there were any grounded migrants, and the quick answer is that there wasn't. A Sparrowhawk drew the attention of half a dozen southward bound Swallows away from their journey, but after they had escorted the Sprawk off the premises, they continued on their original flight-path. 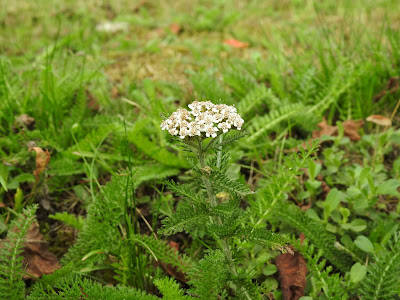 Yarrow is a common plant that is flowering at the moment, and it is one of
my favourites. This individual was growing between two headstones, and had
been missed by the over zealous local authority botanical terminators, armed
with their strimmers and mowers
During the week, we received notification from the BTO that one of our Reed Warblers from the Nature Park had been captured elsewhere by another ringer. Reed Warbler ALJ4086 was ringed by me as a juvenile on 6th August 2020, and had been captured 329 km to the south by another ringer at Squire's Down, Dorset on 11th August 2021. See Google Earth image below. The juvenile that I ringed was now an adult female. It is highly likely that when I ringed her on 6th August 2020 she was a migrant from further north, and on that morning, she was one of ten Reed Warblers that I ringed. Interesting stuff. 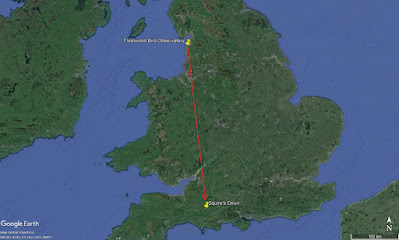 Talking about ringing, the forecast is looking good for ringing for about 10 - 12 days at the moment, starting from Sunday. So hopefully, we'll be able to catch up a bit before we run out of August!
Posted by The Hairy Birder at 20:16