I took my eye off the 'weather ball' last night and missed an opportunity to ring some birds at my feeding station as I find out when I went to feed this morning and it was flat calm! A school boy error that I won't repeat again!

I headed off to the feeding station and recorded 16 Chaffinches, five Yellowhammers, 118 Tree Sparrows and three Reed Buntings making use of the food that I provide.

I took a half hour walk before heading home and headed south along the Big Field instead of north. A couple of Stock Doves flew over heading towards the woodland and a flock of 15 Lapwings lifted from the stubbles. Lapwings weren't the only species using the stubbles as I put up three Snipe, a Jack Snipe, eight Skylarks and nine Brown Hares were also utilising them. 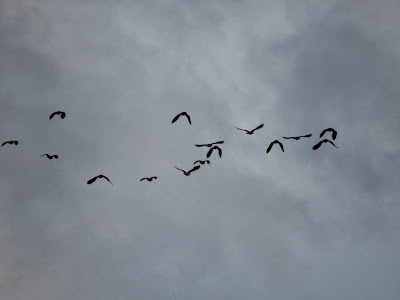 On the telegraph wires were 224 Starlings and in one of the fields 207 Black-headed Gulls and two Common Gulls fed. I cut back across the Big Field to the 97 Hedge and had a Song Thrush, seven Linnets and two Grey Partridges. As I headed back up the track to my car a Coal Tit sang from the woodland.

As I headed off site I had 37 Redwings perched in the top of an Ash Tree. These were the first I'd seen for sometime and I wondered whether there was the start of a bit of semi-return passage going on. 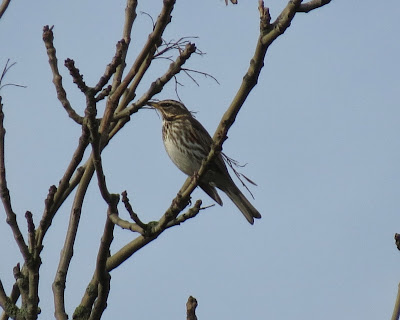 It's going to be very wet in the morning, so it's a good opportunity for me to catch up on some work
Posted by The Hairy Birder at 16:07