I only had time for a quick scamper around the Obs yesterday morning, so I had a quick look on the sea and a search of a couple of spots for grounded migrants. The weather was 4 oktas cloud cover with a west-northwesterly wind about 10  - 15 mph.

Stood on top of the dunes so I could look over the sea and keep an eye out for any passing migrants there was a little bit of vis going on, and everything was heading northeast. I only watched for about an hour and a quarter, so my totals only included a Siskin, 172 Meadow Pipits, eight Carrion Crows, a Goldfinch, five Linnets, four Alba Wags and a Sparrowhawk.

The sea was equally as quiet, or a combination with me not spending long enough, anyway my totals were 25 Common Scoters, four Red-breasted Mergansers and two Whooper Swans. At first I couldn't get a feel as to whether it was a 'grounded' morning or not, but after a while it was obvious that it wasn't as all I had was a Wheatear and a White Wagtail.

Waders were conspicuous by their absence and roosting at high tide were just 101 Turnstones. The forecast is looking good for the next couple of days as the wind swings round to the south and warm air is forecast to surge northwards from Africa. Hopefully it will open a few migrant floodgates and amazingly it looks like the winds will be light enough to get nets up both days over weekend at the Obs! 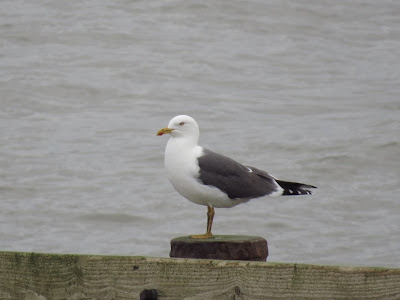 Lesser Black-backed Gull
Posted by The Hairy Birder at 19:58