Yesterday morning dawned with clear skies and a strongish northwesterly wind. As you will know I have a considerable distaste for northwesterly winds as it usually means few or no birds, but this morning was an exception.

From the off it was clear that birds were urgently on the move as they were powering north in to the strong wind. The strong NW wind forced the birds to fly low as wind speeds would be less closer to the ground. Normally in such clear conditions the birds would be very high. Pipits and finches were moving on quite a broad front and I observed them over the farm fields, the beach and even out at sea when I was looking through my scope.

The following totals are really a minimum as it is difficult to count everything. Anyway, I had 165 Linnets, 161 Goldfinches, a Carrion Crow, three Alba Wags, five Siskins, a Redpoll sp., four Swallows, a Sand Martin, two White Wagtails and 835 Meadow Pipits.

It wasn't a grounded morning so two Wheatears and three Goldcrests were acceptable. The sea was quiet, or maybe I wasn't giving it enough attention because of all the vis action, and all I had was two Gannets, a male Eider and a Red-throated Diver! A female Peregrine heading southwest over the fields was also noteworthy.

I then headed to the water treatment works mainly to take down my feeders from the feeding station but also to see if there were any migrants in there as it is away from the coast and sheltered. All I had was three singing Chiffchaffs, and although not migrant birds it was nice to record my first Speckled Wood butterflies of the year. 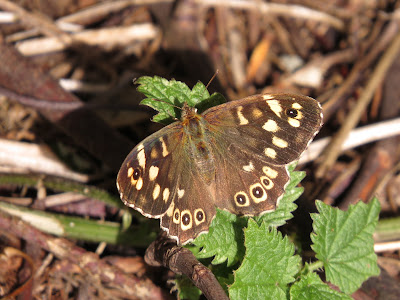 My garden moth trap this morning held just eight moths; six Hebrew Characters, a Common Quaker and my first Early Grey of the year. It's north Cumbria for a bird survey tomorrow morning for me with a very early start!
Posted by The Hairy Birder at 20:42