At first light at the Obs there was a ground frost and I also had a heavy dew in my beard! The skies were crystal clear and it was flat calm. From the outset it was obvious that Redpolls were on the move, but sadly they were up in the stratosphere. It's difficult recording the vis when conditions are this clear as what you are really recording is just registrations. You hear a bird calling high up, you can't see it, so it is just a registration; it could be a single bird, but it could also be a small flock.

The most surprising observation of the morning was two Red-legged Partridges, that were a new species to be recorded at the Obs for me. In fact shortly after I had seen them I caught one of them in a mist net, but it got out before I got to the net. There is an absolute ban on ringing Red-legged Partridges by the BTO so even if I had managed to extract it, it wouldn't have been ringed.

On the subject of ringing I ringed 26 birds as follows (recaptures in brackets): 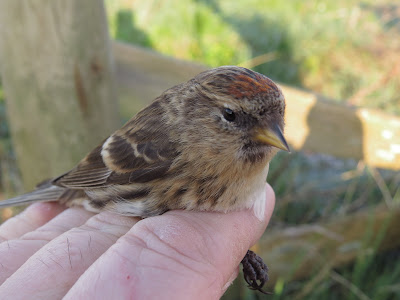 Lesser Redpoll (above & below) 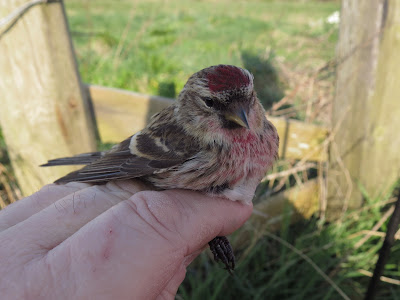 It wasn't a grounded morning and in fact I had no grounded migrants at all. The only other observation of interest I had was a female Sparrowhawk that slowly headed north. I couldn't decide whether it was a migrant or not, or just the female of a local breeding pair.

When I got home I checked my moth trap and all I had was a single Hebrew Character, mind you it was cold last night.

I'll be out again in the morning recording any migration, but without mist nets as it looks like it will be a tad breezy for the relatively exposed net rides at the Obs.
Posted by The Hairy Birder at 21:02