I always seem to be moaning about the weather, but this winter I feel somewhat justified as it seems to be worse than ever. I suppose all the weather statistics at the end of winter will either prove of disprove my feelings. And because of the weather it has been tricky getting out either on the patch at weekends or during the week for work.

Mid-week last week I was at my coastal winter bird survey site, with some half decent weather, that covers part of an estuary as well as improved farmland, and also that very ordinary pond that I have mentioned a few times before with the wintering wildfowl. My survey started on the improved grassland with a fairly large count of 21 Magpies. Usually I expect to record Little Egret down on the intertidal stretch of the river, but on this morning I had one on one of the farmland ponds! 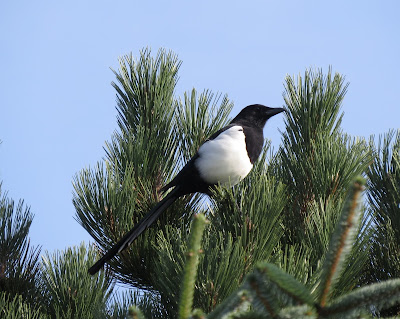 The aforementioned bland pond held 30 Teal, so I was quite pleased with that. Raptors were thin on the ground except for three Buzzards, and I am finding now that Buzzard is the commonest raptor that I record when I am out birding. When I started birding in the 1970s Sparrowhawks were scarce, and were probably still recovering from the DDT caused population crash. Ten years on and they became very common, but I don't see them too often now, and my gut feeling is that they are being persecuted by numerous idiots within the shooting and pigeon keeping fraternity!

Close to the river some Pink-footed Geese were feeding in adjacent fields and I counted 778 in total. I had a good look through them and couldn't see any other than Pinkies. Out on the mudflats a flock of 214 Curlews switched from feeding, to preening, to roosting, to feeding and were in the company of 40 Black-tailed Godwits and 24 Redshanks.

The weather for this coming week isn't looking good, other than for catching up on paperwork in the office! I hope it changes!
Posted by The Hairy Birder at 21:33