The Best Laid Plans of Mice and Birders...

...sometimes get kyboshed! On Sunday morning the plan was to go to Cockerham to have a look at our latest ringing/birding site, where the owners have given permission for ringing group members and their vehicles to access their private land. A variety of habitat can be found at the site, but one area of interest are some wet fields where we hope to catch and ring Snipe. The idea was to have a look and get an idea of how many Snipe were present. However, after three days of frost I guessed that any water would be frozen and Snipe departed for the coast, so it will have to wait until next weekend.

Instead, Gail and I headed down to the estuary, my second visit in as many days. It was a glorious morning with clear blue skies, virtually no wind and a frost. A quick look on the reservoir revealed a number of Tufted Ducks, plus a respectable count of 13 Little Grebes. 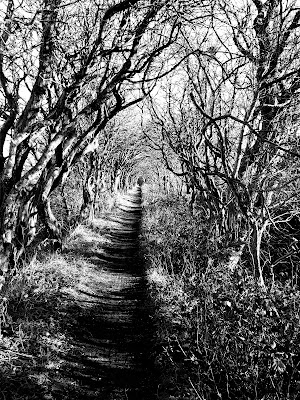 The path through the 'enchanted' hawthorns that leads
to the estuary! 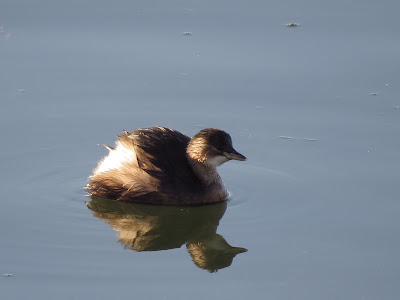 Out on the river along the saltmarsh edge was 172 Teal and 90 Wigeon, and further out on the mudflats 25 Shelducks. A Goldcrest and a Kestrel was the only other species of note that we recorded, and we headed back to the car. We didn't see a great deal but it was a pleasure to be out, and it was more of a 'leg stretch', than a serious birding trip!
Posted by The Hairy Birder at 14:40