'Sheep Wrecked' is an expression that George Monbiot would use to describe the habitat/landscape that I was undertaking a bird survey in yesterday afternoon; over-grazed, poached and gappy hedgerows with the bottoms eaten out. Nevertheless, I had work to do and spent three hours surveying under full cloud cover with a 4-5 westerly wind. Oh, and it was cold! 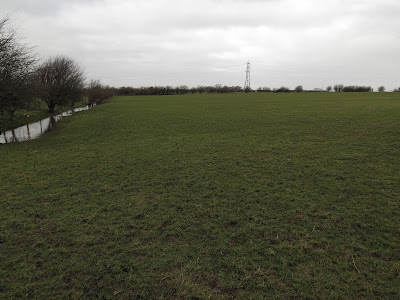 I recorded 24 species which is probably what I would expect based on the habitat and time of the year. I was surprised at the lack of Pink-footed Geese moving and all I had was a group of four flying west. Other fly-overs included two vocal Buzzards and a couple of Cormorants.

I was first aware of the Buzzards because a large flock of Gulls got up, including 622 Black-headed Gulls, and then out of the melee the two Buzzards appeared. An adult male Sparrowhawk spooked some of the local Blackbirds, and the only other raptor I had was a male Kestrel.

There are very few Thrushes around at the moment and just three Redwings and five Fieldfares was testament to this. One theory is a lack of berries because of storms before Christmas removing what was left from the trees. I can buy into that.

And that was it, well of anything of note anyway. It's going to be windy over the next couple of days, but I'm hoping that I'll be back out towards weekend.
Posted by The Hairy Birder at 10:35