It was clear and cold yesterday, with a 15 - 20 mph northerly wind, that my Norfolk friends would call a 'lazy' wind because it blows through you and not round you! I bumped in to Ian just as it was coming light and we walked down to the estuary.

The main feature of the morning was a southeasterly movement of Woodpigeons and in total we had 378 cross the river and head southeast. Besides where were they going and why, the other question was where had they come from? Woodpigeons do often move ahead of cold weather, but up until fairly recently it has been mild with just a couple of days of frosty weather. My guess is that it was a weather related movement, and probably a cold weather movement from further north.

Out on the estuary was a single adult Whooper Swan with a supporting cast of 2,120 Pink-footed Geese, 71 Curlews, 20 Teal (probably nearly ten times as this tucked away somewhere), 40 Wigeon, 135 Lapwings, 12 Shelducks, 80 Dunlin and a single Little Egret. 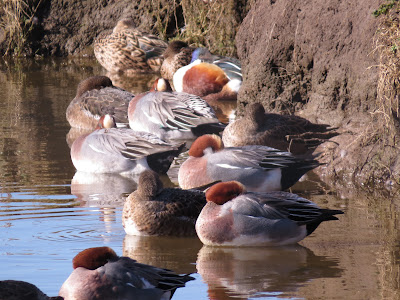 We had a look on the saltmarsh and there were 47 Snipe and surprisingly just one Rock Pipit. Visiting parent and in-laws for the rest of the day meant it was an early finish for me. There's always tomorrow!
Posted by The Hairy Birder at 21:30