My few hours birding, during this hectic week, started yesterday afternoon when I called at my feeding station on my way back from a meeting. It was a glorious afternoon and I was looking forward to a nice walk along the 97 Hedge. However, this didn't happen because in the Big Field were 28 Shelducks (record count for me here) and I didn't want to flush them as I surely would if I had headed along the 97 Hedge. So my visit was fairly protracted. 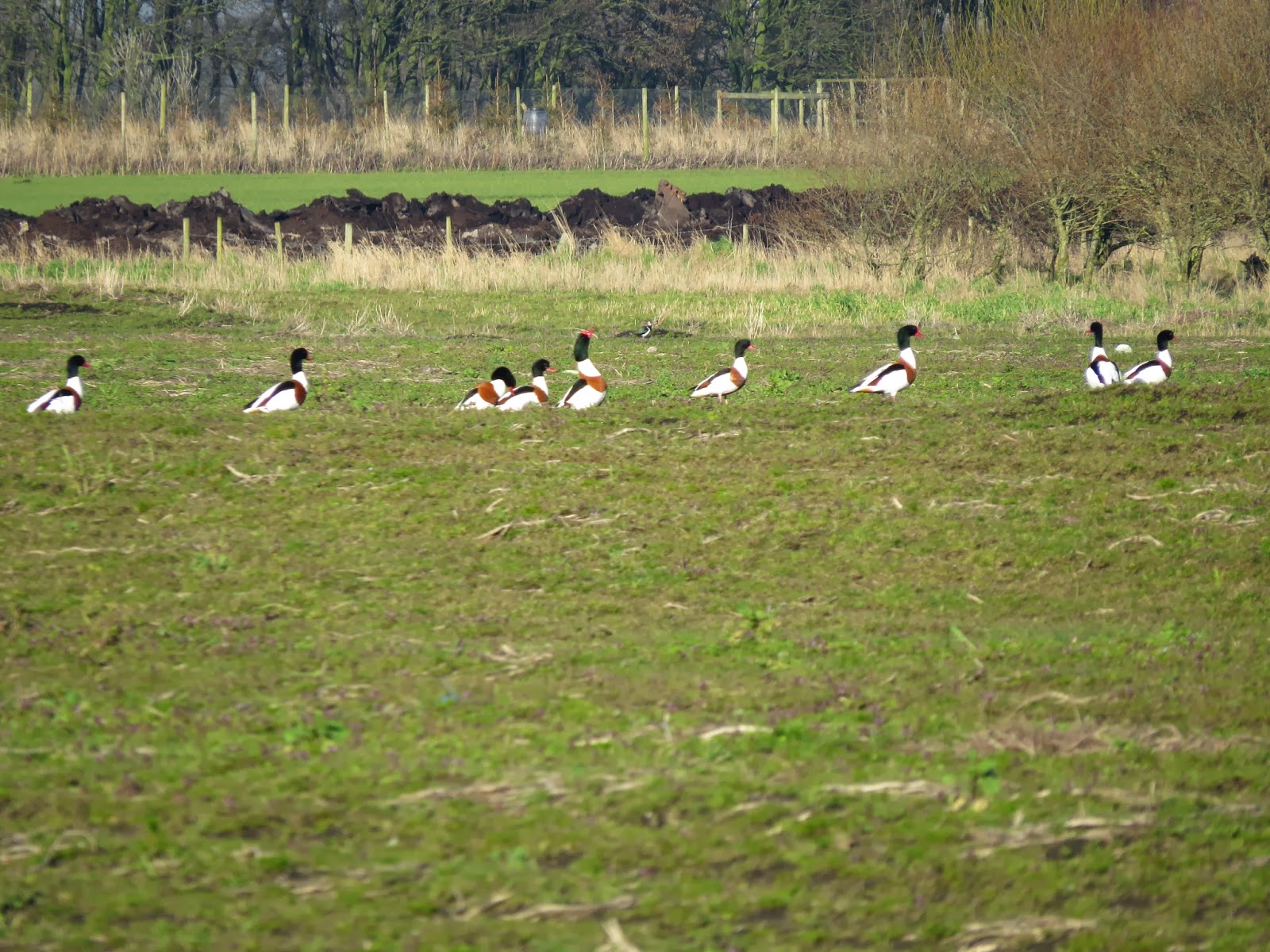 Some of the 28 Shelducks in the Big Field

The Green Sand was on the flood and two Buzzards were 'knocking about' the woodland. There are less birds at the feeding station now as I am slowly winding it down and gently weaning the birds off it, so just 22 Tree Sparrows today.

A quick look on the river on my way home revealed a male and two female Goosanders and 12 Curlews, but very little else.

I had a report with a deadline of today and I was confident that even with an hour and a half's birding on the coast I would still get it done so I treated myself. It was a glorious morning, if a little cold at first, with clear skies and a light southeasterly breeze.

There was some vis, but not a huge amount, mainly because we have had settled conditions for a few days now and a great deal of 'stuff' will have moved through, and with it being still early in the spring there isn't a huge amount on the move as yet. My vis totals included two Grey Wagtails, 60 Pink-footed Geese, eight Alba Wags, eleven Linnets, two Rooks, nine Meadow Pipits and a Goldfinch.

The sea was like a mill pond, albeit with a little haze, but passage at sea was fairly light. I had 30 Eiders, 25 Common Scoters, 20 Whooper Swans on the sea, 21 Cormorants, 13 Shelducks, two Red-throated Divers and a Red-breasted Merganser. I also had the male Long-tailed Duck that steamed through the water and took up residence with a pair of Eiders.

I was hoping for my first Wheatear this morning, but it wasn't to be, and I had to make do with a male Stonechat.

I was hoping to get out ringing tomorrow but the 'pea souper' we have outside at the moment has put paid to that. I might nip out for an hour between reports when it clears later and see if I can find some Wheatears.
Posted by The Hairy Birder at 21:47

A pea souper here all morning too mate!

Once had a couple of Shelduck fly over my patch, would be good to see that happen again :-)