..........but there were a few migrants around this morning. In fact there were one or two juicy migrants recorded at the Obs today by Ian, but unfortunately I didn't see them. Have a look here at our Fleetwood Bird Observatory blog for details in a day or two. Anyway, back to this morning.

When I got out of the car it felt a bit 'birdy' and straight away I had a Chiffchaff calling and after I had only walked fifty yards a Willow Warbler was giving it's autumnal sub-song. This definitely emphasised the feeling of it being a bit birdy, but it didn't really progress any further than that. There were one or two other grounded migrants including five Robins, three Wheatears and a Goldcrest. 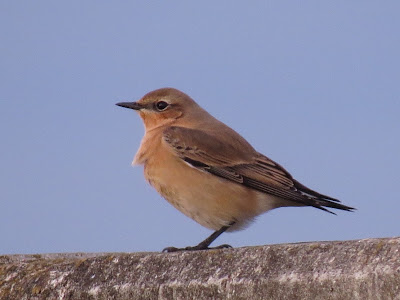 There was a trickle of vis at first light before the wind picked up and this included a Grey Wagtail, twelve Swallows, 14 Alba Wags, four House Martins and three Meadow Pipits. There is quite a bit of seeding thistle out at the moment and I had 61 Goldfinches feeding on it.

The only raptor I had was a male Kestrel and a flock of 40 House Sparrows in some brambles was noteworthy. I was chatting to the guy that does some pest control within the Obs recording area and he showed me a picture of a dead owl that he had found and it was a Short-eared Owl. He had seen it a day or two before and it was struggling to fly, so it had obviously been unable to hunt and succumbed to starvation; a sad end for such a magnificent bird.

I'm working again in glorious Cumbia again later this week, but I might just be able to squeeze a couple of hours birding one morning earlier in the week.
Posted by The Hairy Birder at 20:23