Snatched From The Jaws Of A Schoolboy Error

Kim and Me had the first ringing session of the autumn in some of the coastal habitat at the Obs this morning and we just managed to avoid a near disaster. We had virtually clear skies at dawn and it was calm. After about an hour some cloud came in from the east and birds then started to move.

At this part of the Obs recording area I only ever put two nets up as most of what I catch is tape lured. We successfully put up a little eighteen foot net that intercepts a ditch and hedgerow and then we went to put the other net up in another ditch with Hawthorn. This is where it all went wrong as when we were putting the net up we could see that one of the shelf strings was broken. This was unusual as the net had been used relatively recently to catch Swallows and as far as I am aware there was no issues when it was put away then. This shouldn't have been such a disaster as I should have had a spare with me, but I didn't! So the moral of this schoolboy error is always carry a spare net with you!

We persevered with just one eighteen foot net and managed to ring fifteen birds as follows (recaptures in brackets): 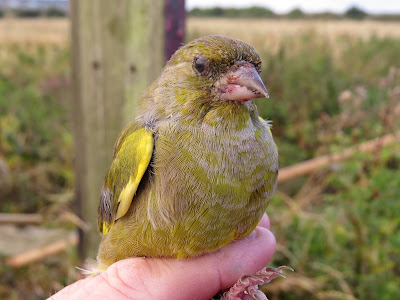 As stated above when the cloud cover increased birds got on the move and on vis we had 13 Alba Wags, four Swallows, 44 Meadow Pipits, three Goldfinches, four Siskins, five Grey Wagtails, 22 Greenfinches and two Skylarks. 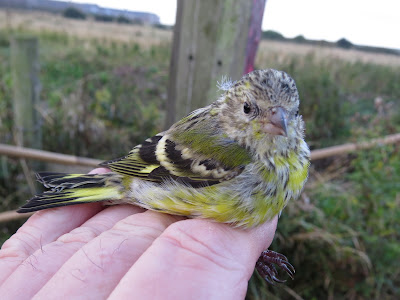 We observed some interesting feeding behaviour from a Swallow that I have never seen before. We watched a Swallow that had caught a large aerial insect that kept on dropping it's invertebrate prey and then diving and catching it again. Whatever the insect was it was still alive as sometimes it made an attempt to escape only to be caught by the Swallow again. The Swallow was too far away for us to be able to tell what the insect was, but it was large enough for us to see the Swallow carrying it!

Grounded birds were thin on the ground with just Reed Bunting and Song Thrush being obviously grounded birds.

We will be making another attempt tomorrow morning and this time I have a packed a spare net!
Posted by The Hairy Birder at 20:16

There are lots of Siskin about this year, early too, makes up for the lack of 'em last winter :-)