Earlier in the week Gail and I headed to our local RSPB visitor centre to buy some seasonal cards in preparation for next year. That's organised I hear you say, but its more the bargain hunter in me, or should I say Gail!

Outside the visitor centre is a largish man-made lake on the edge of the Ribble estuary and it tends to hold a few diving ducks in winter. In fact many moons camel ride ago (1980s) it used to be one of our regular ringing sites. It has some good coastal cover and in the past we have ringed a fair few migrants there and also a number of Swifts during inclement weather when they were feeding low on the aerial insects forced down by the rain. Off the top of my head I have a seen a few good birds there over the years including Grey and Red-necked Phalaropes, Ivory Gull and Woodchat Shrike to name but a few!

No such goodies during this visit! Gail and I did a full circuit of the lake and as expected there were a few diving ducks in the form of 48 Tufted Ducks and ten Pochards. Nothing spectacular, but pleasant to be out! 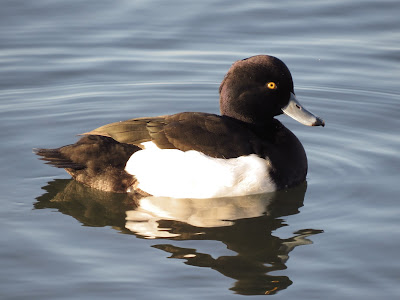 Tufted Duck
Posted by The Hairy Birder at 20:57

Was that at Fairhaven Lake at Lytham?