Earlier in the week Andy, Graham, Kim and I met at Rob and Diana's farm to attempt to catch and ring some waders and wildfowl on their farm wetland. We met an hour before dusk to get the three wader nets up in preparation for when, hopefully, some wildfowl (Teal) and waders (Jack Snipe and Snipe) would fly in after dark.

It was forecast to be calm with cloud cover rolling in to keep the temperature above freezing. However, the cloud cover didn't materialise and consequently the wetland started to freeze. As you can imagine this is not conducive to feeding Snipe in particular and we didn't end up ringing anything! We weren't disheartened as the site has huge potential and at least we know where to put the nets up, and everything is in place ready for our next visit. 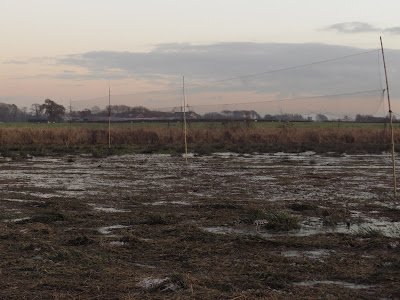 Mist nets over the marsh

We did record a few bits and pieces when we were at the site including 400 Teal (in the longer vegetation), two Grey Wagtails, a Kingfisher, a Peregrine and 20 Redwings.

This morning I decided to watch the tide run in at the Point and it was a glorious morning with full cloud cover, and it was calm, resulting in the sea being as flat as a mill pond! On the sea I had 25 Cormorants, 47 Eiders, nine Red-breasted Mergansers, two Great Crested Grebes, a Wigeon, 16 Common Scoters and two Red-throated Divers. 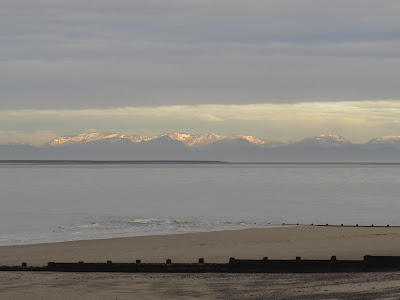 Looking across the Bay to the Lakes

The only waders I had were 46 Oystercatchers, seven Redshanks, a Curlew and four Ringed Plovers. Walking back to my car I had a female Stonechat in the Gorse. 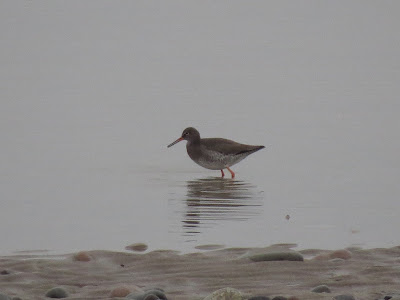 Redshank
Posted by The Hairy Birder at 12:54

I remember attempts at ring waders, usually on tidal areas. 9 times out of 10 we would fail dismally, but the odd time a Dunlin, Redshank or Ringed Plover made it worth while...