On Friday morning I nipped to the water treatment works to check on my feeders. They had been up a week and I was interested to see if any birds had found them, and they had, and in fact they were all virtually empty! In addition to the feeders I put some seed on the ground and some apples. I didn't record much other than three Long-tailed Tits and five Goldfinches. 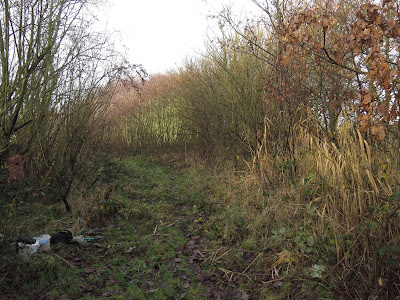 The area of the feeding stattion

Saturday morning under 7 oktas cloud cover with a light southeasterly wind I was again at the water treatment works, this time to do some ringing at the feeding station. I never go at first light so it gives the birds time to feed first, and my ringing sessions are never longer than a couple of hours, so there is plenty of time for the birds to use the feeding station for the remainder of the day.

A few Pink-footed Geese went over during the morning, c.500, and I found out later that there were two Barnacle Geese amongst them, but when I had a look on some of their favoured fields on my way home they weren't there.

A flock of sixty Linnets were feeding on some grassland adjacent to the treatment works and when disturbed were flying in to the tops of the trees close to where I was ringing.  A Great Spotted Woodpecker, a Song Thrush and two Goldcrests are just about worth mentioning.

I ringed nine birds as follows (recaptures in brackets): 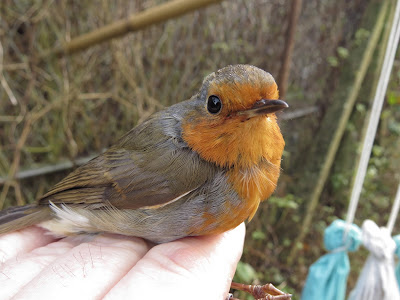 There's been a lot of discussion of late on various blogs, forums etc on the ringing of a rare bird in Devon. I don't intend to go in to details on the 'wheres and why fors' as lots of self-proclaimed experts have commented enough, largely based on third hand information! However, what has been annoying is that several of these self-proclaimed experts have commented on the condition of the bird based on its fat score, and have declared the bird was in poor condition because it had a fat score of 1! What the f***! I have tried to educate some of the main protagonists that fat score isn't indicative of a bird's health, but if fell on deaf ears because it didn't fit their agenda.

Of the fourteen birds I trapped this morning ten had a fat score of 0, two of 05 and one each of 1 and 2. None of these birds were in poor condition, in fact they were just the opposite, fit and healthy with good muscle scores and normal healthy weights. To put it very basically fat is an indicator as to whether the bird is fuelled to migrate, or is storing fat as a survival strategy for sever weather. You would expect a bird that isn't moving to have a zero fat score or one at the most! Then again what do I know compared to these self-proclaimed experts!
Posted by The Hairy Birder at 21:21