A Raptor Kind Of Day

After declaring that I would be out surveying at least four days this week, three of the days fell through! On Monday access wasn't arranged in time for the site that I was at today, Tuesday I set off for northwest Cumbria and it rained all the way from home to Penrith, so I turned round and headed home, and Wednesday the forecast changed from a dry picture to a wet one! So today was my first time out in the field this week!

My site close to the River Wyre this morning is potentially influenced by the tide so I have to do a series of low and high water visits, and today it was a high water visit, so with a mid-day high tide it was a late morning start time. It was a very pleasant morning and afternoon, with just one okta cloud cover and a light-moderate southeasterly wind. The southeasterly wind was warm, and it made it feel like a raptor kind of day.

I did have a few raptors actually in the form of at least six Buzzards, a female Kestrel and a female Sparrowhawk. I thought a couple of the Buzzards were possibly migrants as they headed east and north on the kettles of warm air. 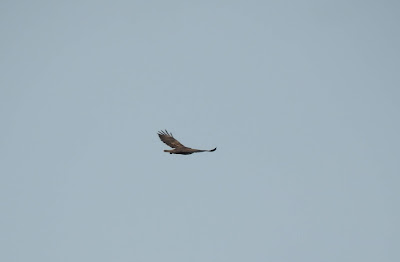 Buzzard (with its back to us!)

Finches were represented by 15 Goldfinches, eleven Chaffinches and a single Siskin that headed north. The Siskin was probably on vis, and the two Skylarks I had certainly were. Only four Pink-footed Geese this morning and a group of 64 Lapwings headed high east; continental birds?

In the woodland I noted five Long-tailed Tits and single Jay and Song Thrush, and out on some of the pasture were 211 Jackdaws.

My favourite bird was a Woodcock that I put up from some scrub adjacent to some woodland. Other than that I have to mention all the Hazel catkins that looked resplendent shimmering in the spring sunshine. 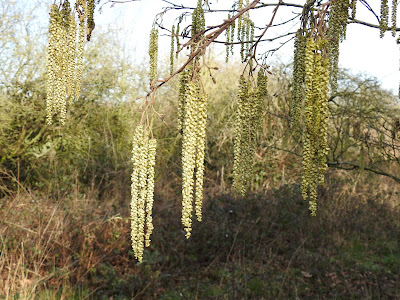 The moth trap is on in the garden as I type, and I'm going to check the water levels in the reedbed tomorrow morning. I know I won't be able to get in, but I want to see just how much water is in there to try and gauge if I can get some ringing done there in early spring.
Posted by The Hairy Birder at 21:39